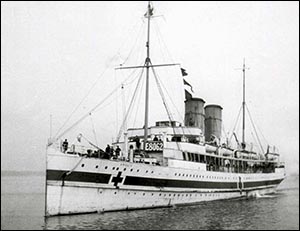 This anchor was salvaged from the wreck of the former Holyhead ferry SS Anglia, and was placed here as a memorial to all of the town’s mariners killed in the World Wars. Alongside the anchor is a part from RMS Leinster, another local vessel lost in the First World War.

SS Anglia was built in Dumbarton, near Glasgow, in 1900 for the London & North Western Railway’s route between Holyhead and Dublin. Soon after the outbreak of war, it was commandeered by the Admiralty and converted to an armed boarding steamer, named HMS Anglia. In April 1915 it was refitted as an auxiliary hospital ship, HMHS Anglia, and shuttled between Boulogne and England to collect wounded soldiers. It was manned by its regular Holyhead crew, three nurses, three Army doctors and 28 men from the Royal Army Medical Corps.

The ship’s captain and first officer received a gold pin set from King George V as a reward for the care he received on board, after injuring himself in a fall from his horse while inspecting troops in France.

On 17 November 1915, HMHS Anglia (pictured above right) struck a mine near Dover while carrying 390 wounded soldiers, medical staff and a crew of 56, mostly from Anglesey. The ship took just 15 minutes to sink. Many people were rescued by HMS Ure, but five army officers, 128 soldiers, a nurse and nine RAMC men lost their lives, along with 25 crew – of whom 23 were from Holyhead.

The ship’s anchor was retrieved from the seabed and is displayed here with a replica chain, welded to prop up the anchor.

In front of the anchor is a piece of the deck of RMS Leinster, built in 1897 in Birkenhead for the City of Dublin Steam Packet Company (RMS = Royal Mail Ship). The pair of bollards (known as “bitts”) to the right of the anchor were attached to this deck piece.

RMS Leinster was sunk by a German submarine on 10 October 1918 while carrying 697 passengers, 76 crew and 22 postal sorters from Dublin Post Office. Officially, 501 people died in the tragedy, but recent research has traced the names of 530 casualties. This remains the worst maritime disaster of the Irish Sea.

Local men who died on both ships are named on Holyhead cenotaph. You can read their details here. Other victims included Mary Ann Johnson of Llandudno, and Military Cross winner Frank Horton, named on Wrexham war memorial.

Other SHIPWRECK HiPoints in this region:
Charlemont wreck 1790 – packet ship foundered at Holyhead with loss of 110 lives
Holyhead lifeboat – gold and 10 silver medals for rescue before ship sank at South Stack