This Victorian shopping arcade has been a focal point of the town’s commercial life since the late 1890s. The first traders here sold fish and fruit, meat, ices and other refreshments, ironmongery, clothing, confectionery, tobacco and toys. A chemist, grocer and hairdresser also traded here. The photo, courtesy of Abertillery & District Museum, shows the arcade c.1920. 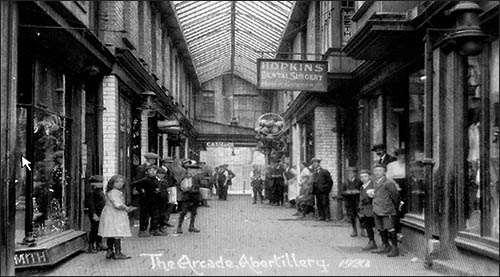 The arcade was instigated by councillor Samuel Nathan Jones, who had taken over his father’s grocery business in the vicinity. His parents, Edward and Jane, had opened Abertillery’s first post office in 1848. Samuel’s cousin Charles Evan Hughes became Governor of New York State in 1906.

The café in the arcade was run by a succession of Italian immigrants, with the surnames Bracchi, Tedaldi, Berni, Carpanini and, until 1932, Marenghi. Giovanni Tedaldi and his English wife Mary, of the Arcade, fell out of a train near Hereford in 1910 while travelling home from the Shrewsbury Flower Show. In the darkness they thought the train was at a station and stepped out of their compartment, one after the other! Although injured, they were conscious when taken to hospital by motor car.

Tobacconist John Thomas James was fined £50 in 1909 (over £6,000 in today's money) for using his shop in the Arcade for betting. Police had observed 22 men visiting the shop for about one second at a time! 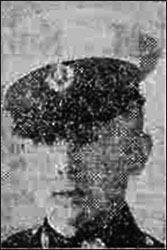 After an unusually heavy snowfall in March 1933, the arcade’s glass roof broke under the weight of snow.

Mr and Mrs G Williams, who lived in the Arcade’s Prudential Buildings, were informed during the Second World War that their son John was being held as a prisoner of war by the Japanese. John (pictured left) had attended Bryngwyn Central School and worshipped at King Street Baptist Church. He worked at Vivian Colliery, Abertillery, before joining the Royal Marines in 1937. He was a Gunner on the battleship HMS Prince of Wales, sunk by Japanese aircraft in December 1941.

With thanks to Graham Bennett and Shaun McGuire

More about the Arcade’s history on Graham Bennett’s website