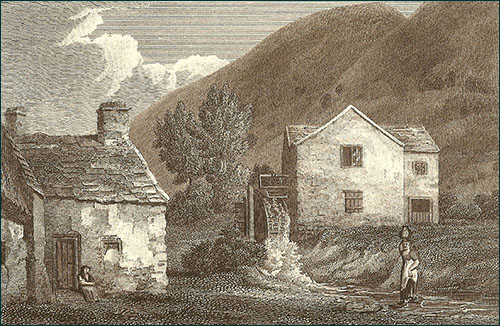 This building, now home to a café run by the community, was originally the village’s corn mill. The machinery was powered by a waterwheel on the north-eastern side of the building. A sluice diverted water from the river about 500 metres south-east of the mill. The mill leat’s final section before the mill is still visible, alongside the road.

There has probably been a flour mill here or nearby since the Middle Ages, possibly associated with the Welsh princes’ court in Abergwyngregyn.

The earliest depiction of the mill (right) shows the mill as it was c.1820, with a cottage nearby called Llerpwll (‘Place of the pool’). In the 18th century most of Abergwyngregyn village was owned by the Bulkeley Estate. It passed to the Penrhyn Estate in the mid-19th century and was enlarged, probably to the building we see today. The wheel is shown in the painting below, by Victorian artist Henry Harper.

In 1850 the mill lease was taken over by Ellis Jones & Co, shipbuilders and merchants of Bangor. This enabled the company to supply “home-manufactured flour” in addition to its usual stock of English, Irish and French flour. 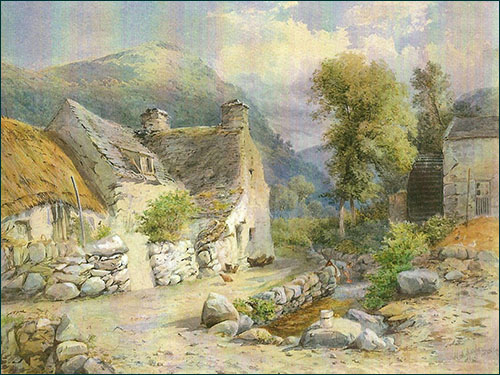 John Roberts of Aber mill was prosecuted in 1851 for not displaying his name on his cart. Magistrates discharged him with a caution. John Thomas, also of Aber mill, was less fortunate in 1866 when he was fined for drunk and disorderly behaviour in Aber village on a Tuesday morning and afternoon.

The mill fell into disuse by the First World War. In 1925 the mill, including its waterwheel, shafts and drive, was included in the “Sel Fawr”, when the Penrhyn Estate put most properties in the village up for sale. The Mill did not sell, and was later given to The Young Men of Aber’s Club, a charity which ran a snooker club here until c.2001. In 2002 the Abergwyngregyn Regeneration Company was established and purchased the building for redevelopment as a café, community room and snooker club.

With thanks to Hywel Thomas