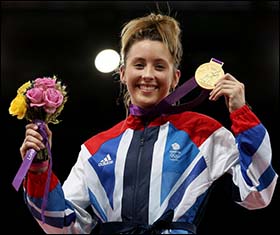 This post box was painted gold in 2012 to celebrate the taekwondo gold medal won by Jade Jones at the 2012 Olympic Games, held in London. The pictures of her with her medal and after her victory are shown here courtesy of GB Taekwondo.

Taekwondo was developed in Korea after the end of Japanese occupation during the Second World War. Its formation was influenced by various types of martial art in and around Korea over many centuries including judo and karate. It became an official Olympic sport in 2000.

Jade Louise Jones was born in March 1993 at Ysbyty Glan Clwyd to Jane and Gary Jones of Flint. When she was 10 years old she sometimes helped her father to harvest cockles from the Dee estuary. She also began to get into fights with boys, and started smoking aged 11. Her parents thought that martial art would instil better discipline. 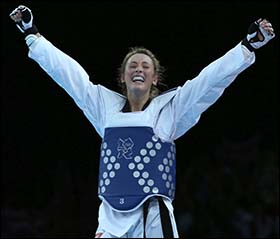 Her grandfather, Martin Foulkes, took her to her first taekwondo sessions when she was eight years old. She showed great talent for taekwondo in her teens, and left Flint High School aged 16 to devote herself full-time to the sport.

The Royal Mail repainted this post box soon after Jade won her gold medal on 9 August 2012 in the women’s under 57kg competition. She was the youngest British gold medallist at the 2012 games. At the end of the year, while still 19 years old, she was awarded the MBE (Member of the Order of the British Empire) honour and was voted BBC Wales Sports Personality of the Year.

The Royal Mail promised to issue a stamp for every 2012 gold medallist by the day following their victory. When Jade won her medal at 10.30pm, stamp designers quickly selected a photo of her victory and the stamp was ready for printing within an hour, setting a British record for the shortest stamp production time.

Jade retained her title at the 2016 Olympic Games in Brazil.