The southern part of Hailey Park was created in 1925 on land between the river Taff and the Glamorganshire Canal.

The canal runs diagonally across the 1947 aerial photo, shown here courtesy of the Welsh Government. Hailey Park is in the lower half. By then, the canal was disused and had recently been bought by the council, which filled it in. 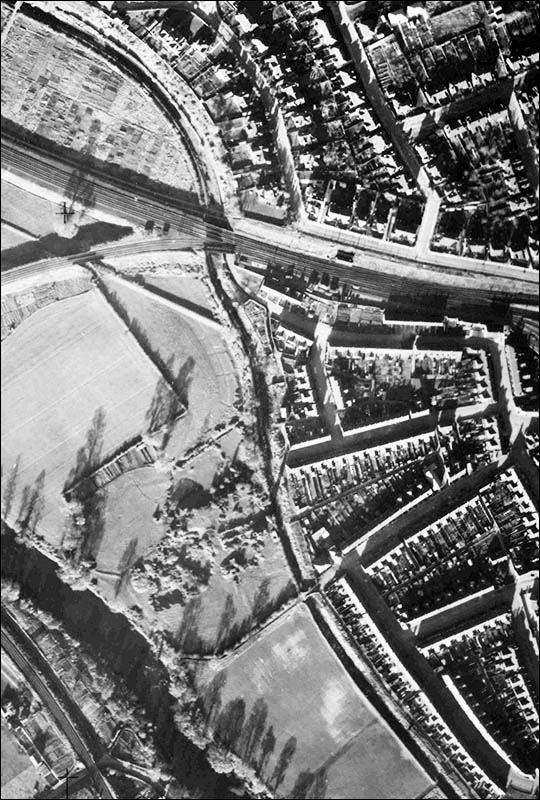 North of the park, the canal ran alongside Tŷ Mawr Road to Melingriffith tinplate works. The road under the railway has been widened and lowered, but the footway still shows the level of the canal.

In the centre of the photo you can see a thin shadow falling diagonally across the canal – the shadow of the old brickworks chimney. The works was owned by Solomon Andrews & Son, which built many houses in the area. The 34-metre chimney was erected in 1889, along with a kiln, engine, boiler and machinery.

When the canal was created in the 1790s, it was surrounded by farm fields in this vicinity. A bridge over the canal carried the old Radyr Road, which originally led to a ford.

As more houses were built in the area, the canal was a constant danger to local children. In 1899 a group of children were playing near the canal when one of them, Henry Garfield Thomas, aged 8, fell in. Charles Yorath, a Melingriffith worker, rushed to the scene and jumped in to save the boy, in the nick of time. It was not the first time he’d rescued a youngster from the canal.

In 1908 toddler George Stratton, aged 18 months, went missing from his home in Hazelhurst Road. His body was found in the canal. The property backed onto the canal, and it was presumed that he’d gone out through the house’s back door.

In the same year, a boy named Stanley Currie received a Royal Humane Society certificate for bravely saving the life of a boy who had fallen into the canal at Llandaff.