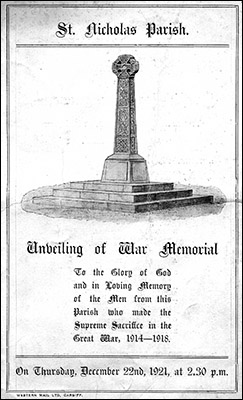 This memorial commemorated local men who died in the First World War and Second World War. To discover who they were, choose a category below.

The memorial was unveiled on Thursday 22 December 1921 by Miss Cory of Duffryn House with the words: “I unveil this memorial to the glory of God, and in memory of the men from this parish who laid down their lives for their country in the Great War.” Her family had made a fortune in shipping and collieries.

The Mackintosh of Mackintosh (Alfred Donald Mackintosh CBE) then gave an address. His son Angus had been wounded in 1914 and died, aged 33, in the USA in 1918.

Mackintosh (senior) was the 28th chief of Clan Chatton, an officer in the Highland Light Infantry and Lord Lieutenant of Inverness. He became heir to the Cottrell Estate in St Nicholas in the 1870s when he married Harriet Diana Arabella Mary Richards, daughter of Edward Priest Richards of Roath, Cardiff. Although his main estate and interests were in the Highlands, he was well known in Glamorgan, where he was once Master of the Glamorgan Hounds. Mackintosh Place and the Mackintosh Hotel in Cardiff were named after him.

The war memorial was made of Portland stone by the Llandaff sculptor William Clarke at a cost of £435. Harry Gregory, his draughtsman, was responsible for the Celtic cross design and the drawing for the unveiling programme (pictured courtesy of W Clarke of Llandaff).

With thanks to Michael Statham, of the Welsh Stone Forum, and Ian Perry