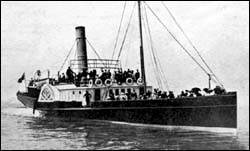 On 20 July 1908, 75 people were waiting on Rhos-on-Sea pier to take a sea trip to Blackpool when, to their horror, the ship they intended to board sank as it approached the pier.

The pier extended for 430 metres (1,400ft) out to sea from Rhos Point, which was long enough for ships to call at any state of the tide. The PS Rhosneigr (pictured right) had set off that morning from Llandudno with 80 passengers who had paid 2/6d (two shillings and sixpence) for the return trip to Blackpool. While crossing Penrhyn Bay, it struck an underwater object which inflicted a 5.5-metre (18ft) gash in its hull.

The captain tried to reach Rhos pier but the ship settled lower and lower in the water, and stopped with just two hundred metres to go. The intending passengers watched the unfolding drama with their hearts in their mouths – the Rhosneigr had only two small lifeboats! Men and boats from the steamer Rhos Trevor, which was moored at the pier, dashed across and saved all of the passengers and crew. Later the Rhosneigr sank completely. The remains of its paddles (pictured left) can still be seen off Rhos Point at low spring tides.

With thanks to John Lawson-Reay, of Llandudno & Colwyn Bay History Society