This ancient building was a mill, powered by water from the adjacent Honddu river. It stands below the Castle Hotel and remains of Brecon Castle. It was also known as Honddu Mill or Watergate Mill. It’s now a residence – please enjoy the view from the road and respect the occupants’ privacy. 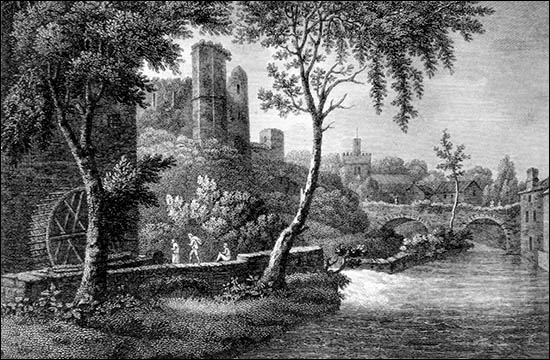 A survey from 1381 records a water grist mill and malt mill in this area. That was possibly a reference to Castle Mill. The waterwheel is on the left in the engraving which was included in an 1804 edition of Gerald of Wales’ 1188 itinerary by Richard Colt Hoare. It is from an original in the St Davids Cathedral Library, reproduced with permission of the Dean and Chapter of St Davids Cathedral.

During the reign of King Henry VIII, two halves of the mill were let to different men, Thethegay Jenkyn and Jenkyn Howard, for a rent of £6.

The mill was still grinding corn in the 19th century, and its machinery remained in place until soon after the Second World War. The mill leat started just beyond the next bridge you can see upstream from here. The leat was filled in long ago.

Brecon is known as Aberhonddu in Welsh because the river Honddu flows into the Usk here. Aber = river mouth.

Watergate Bridge, beside Castle Mill, was built of iron in 1874, replacing an earlier bridge. The road has crossed the Honddu here since the 17th century or earlier.