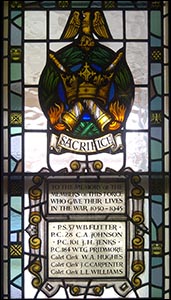 Inside Swansea Central police station are memorials to the local police officers who died in the First and Second World Wars. See below for their details.

Our lists show the each man’s police number first, followed by his military rank.

The memorials were originally at the police station in Alexandra Road. They were moved to the new building and rededicated in March 2002. Among those who attended the ceremony in 2002 were relatives of William Arthur Jones, who served with the Royal Engineers and died in 1915.

The memorial to the police officers who died in the Second World War consists of a stained glass window which incorporates a list of names of the fallen (pictured right). If you’ve scanned the QR codes by the entrance to the station, look up and to the left as you stand in the reception area to see the window. Some of the officers who died in this war were still serving with the police force and lost their lives while helping during air raids in Swansea.

The First World War memorial is a bronze plaque set in a wooden frame (pictured left).

Among the Swansea police officers killed in the Second World War was Charles Johnson of the RAF, who died in 1943. His father, a Merchant Navy captain, was killed by enemy action in 1941. Both are named on Pontypool war memorial.

With thanks to Katrina Farley