The purple plaque on the wall of Abertillery Museum honours Thora Silverthorne, born in Abertillery in 1910. She was the first British nurse to travel to Spain to help the Republicans in the Spanish Civil War. 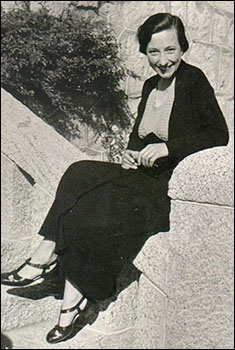 Thora was one of eight children born to Sarah and George Silverthorne. Sarah died when Thora was 16. George, a miner, helped to found the local Communist Party. As a leading union member, he was sacked during the 1926 General Strike and moved to Reading to find new work.

Thora joined the Communist League in Reading. She studied at Oxford’s Radcliffe Hospital to become a State Registered Nurse and theatre sister.

In 1936 the fascist dictator General Franco’s coup against Spain’s democratically elected Republican government sparked a civil war. You can read more about the conflict on our page about the Spanish Civil War memorial in Cardiff.

In August 1936 Thora boarded a train at London Victoria station, where a crowd of c.10,000 had gathered to wish the departing volunteers well. She was elected Matron of a nursing team in the International Brigades.

She and Spanish surgeon Dr Moises Broggi sometimes worked for more than 24 hours without rest when there were particularly large numbers of wounded. The team treated c.700 Republican casualties in one five-day period. The lower photo shows Thora at work in Spain (centre of picture).

During her 15 months in Spain, she set up operating theatres in various – and often challenging – locations. They included bombed-out buildings, schools and even a cave. Brandy was sometimes the only anaesthetic available. 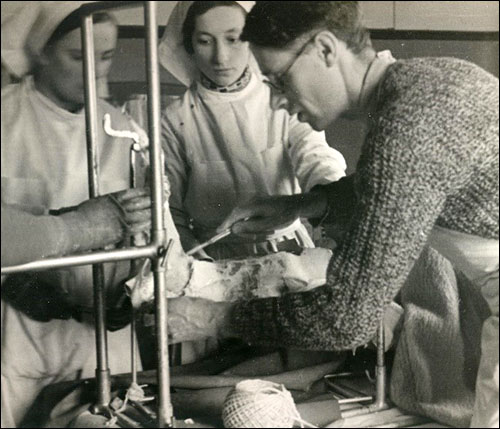 Back in Britain, Thora became disillusioned with the Royal College of Nurses. In 1942 she created the Association of Nurses, which eventually became part of the Unison union. Later she was general secretary of the Socialist Medical Association. In that role she led a delegation to talk to Aneurin Bevan about founding the National Health Service. He hailed from Tredegar, near Abertillery.

Thora and her husband retired to Llanfyllin, Powys, but returned to London in 1996 to be nearer to relatives as she began to suffer from Alzheimer’s disease. Three years later, Thora’s coffin was draped with the International Brigades banner for her funeral.

With thanks to Nancy Cavill