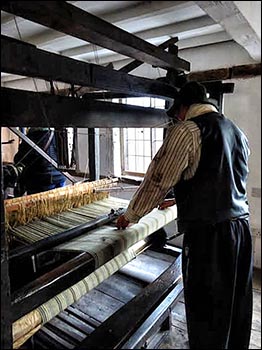 Newtown Textile Museum occupies a building erected in the 1830s as a weaving factory, with on-site living quarters for six families.

At the time, Newtown was experiencing a population explosion as industrialisation of the textile industry created demand for more labour. The town had c.1,600 inhabitants in 1801, and almost 7,000 by the 1850s.

This building consists of six cottages, in back-to-back pairs, on the ground and first floors. The rooms on the upper two floors run the whole length of the building, providing space for the weavers’ hand-operated looms. As you look at the building from the street you can see how the upper and lower floors have contrasting window patterns.

It’s thought that hand-loom weaving here ended in the early 20th century. The upper floors became home to the textile museum in 1967. Now the cottages are also part of the museum. Visitors can see looms and spinning wheels and discover how the textile industry transformed Newtown. The museum also provides expert demonstrations of spinning, weaving (see photo, right) and quilt-making.

The museum has information about some of the people who once lived in this street. Initially the houses weren’t numbered, so it’s only from 1881 that occupants of individual houses can be identified. In 1841, Thomas and Mary Clayton and their six children lived in Commercial Street and worked in the woollen industry. Various members of the family moved to Queensland, Australia, in 1883 and the following decades.

In 1911, 5 Commercial Street was the home of two weavers, William (aged 78) and Matilda Lewis (aged 35). In no.6 were dressmaker Elizabeth Hamer and her sister Katherine, a shirt maker. No.7 was home to brewery drayman Jonathan Williams, his wife Elizabeth and five of their children, two of whom were dressmakers.

With thanks to Sally Rackham