This building, now an hotel, occupies the former Tyndall Street goods warehouse of the London & North Western Railway. From the company’s yard to the east, several sidings extended into the building through the arched openings you can still see. Inside, incoming goods were unloaded and outgoing items loaded onto railway wagons. 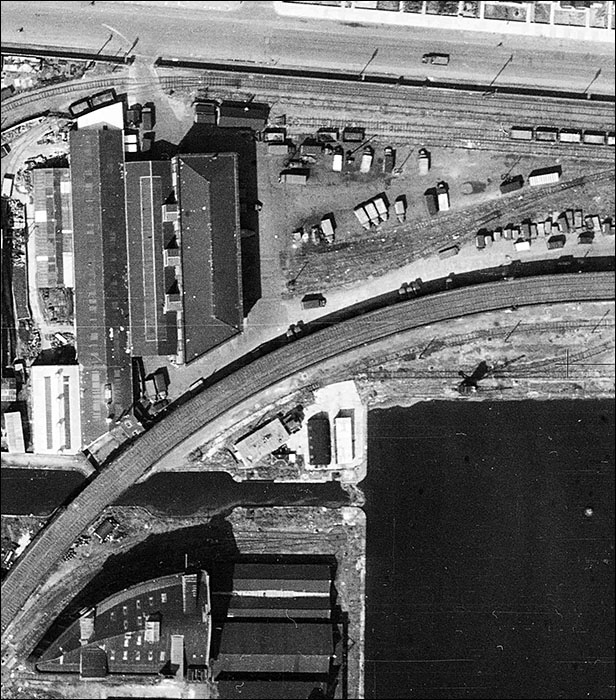 The aerial photos, courtesy of the Welsh Government, show the warehouse (on the left) and yard. The upper photo dates from 1948, the lower 1956. Near the warehouse is the wedge-shaped Spillers & Baker building, which also survives. The railway viaduct between the buildings accounts for the warehouse’s angled southern gable.

The LNWR was one of Britain’s biggest railway companies but was an outsider in Cardiff (where the Great Western Railway and local companies dominated). Its nearest railway line was across the Heads of the Valleys. It was allowed to use the Rhymney Railway’s tracks to Cardiff docks, which it connected to its new new yard and warehouse.

The “commodious goods warehouse” opened on 1 October 1875. Iron girders had been imported from Belgium for the project, although South Wales was renowned for its ironworks. On the same day, the LNWR launched “express goods trains” from Cardiff to convey freight to Abergavenny and onwards to northern Britain and the Midlands.

The goods yard was a hazardous area. In 1887 brakesman William John Murrell, 22, fell during shunting operations and was cut to pieces by trucks passing over him. His remains were taken by a policeman to his widow at their home in Pearl Street. In 1886 four-year-old Timothy Geary was playing with other boys nearby when he ran into the yard and fell under a train of moving ballast wagons. He died instantly.

In 1909 a goods clerk at the LNWR warehouse, Philip Owens, was jailed for three months with hard labour for embezzling several pounds. He had “exercised considerable ingenuity by making a series of fictitious entries” in the accounts. In one case, he pocketed the money due from Messrs Morgan & Co for delivery of seven cases of boots and disguised the theft by making up invoices for transport of 21 bags of nuts to Liverpool.