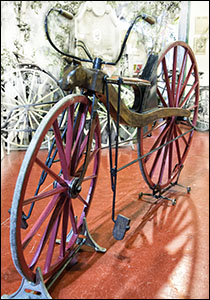 Inside the National Cycle Museum visitors can see an early bicycle whose wheels and principal frame member are made of wood! It is thought to be one of many copies which were made in early Victorian times of an unpatented type by Scottish blacksmith Kirkpatrick Macmillan.

He built his first bicycle c.1839.  He demonstrated the design’s value by making a long-distance ride into Glasgow on one of his machines in 1842.

The pedals of the museum’s example are attached to long arms suspended from a pivot below the handlebars. The rider would push the pedals forwards and back. Iron rods transmitted this movement to cranks on the rear axle. The wheels resemble cartwheels of the period, complete with iron tyres. The wooden frame member has a carved horse head protruding at the front.

The museum, in the former Automobile Palace, displays more than 250 bikes, charting 200 years of bicycle development. Other early exhibits include penny farthings, a “hobby horse” and velocipedes – known as “boneshakers” for reasons which are obvious to the viewer! The collection also includes a Welsh-made bicycle, built at the JA Phillips factory in Newtown after the Second World War.

Other exhibits include jerseys from cycle races, club badges and the gravestone of Maurice Selbach. Born in Paris in 1889, he became one of Britain’s leading bicycle racers and a pioneering bike manufacturer in London. He died on his way to work in 1935 after his bicycle was toppled by tramlines in the road, throwing him under an approaching lorry. His gravestone, rescued from a south London cemetery, features his faded portrait and a carved bike.