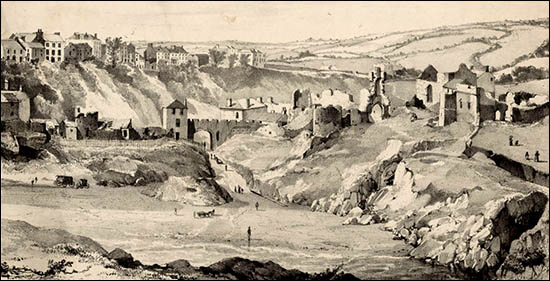 From the south side of Castle Hill you can look across Castle Beach towards the old walled town of Tenby. In medieval times a defensive wall was built along the slope behind the beach, between the walled town and Tenby Castle.

The drawing shows the view of the beach from St Catherine’s Island c.1832, including the remains of the medieval defensive wall and the castle (right). The drawing is shown here courtesy of Llyfrgell Genedlaethol Cymru – the National Museum of Wales. 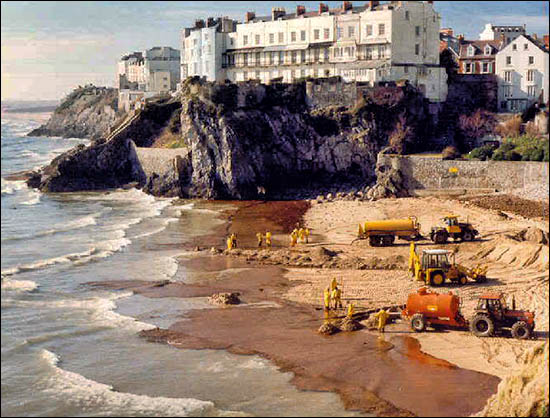 The archway near the centre of the drawing was known as Whitesand Gate and provided access to the beach. The arch there today may have been rebuilt in the late 18th century or soon after.

In 1862 the RNLI built a lifeboat station on the north side of Castle Beach. It was replaced in 1895 by the building which you can see today (with large doors in the gable end). Just 10 years later, the lifeboat was moved to a new boathouse on the opposite side of Castle Hill, as you can read on our web page about the current lifeboat station.

The photo, courtesy of Tenby Sailing Club, shows Castle Beach in 1996 during the work to clear the beach of oil washed up from the tanker Sea Empress, which had struck rocks near St Ann’s Head. More than 72,000 tonnes of oil escaped into the sea, contaminating beaches and oiling thousands of seabirds. Staff from public authorities and many volunteers worked hard to clean the coast and rescue wildlife.