This was once the town’s main hostelry. It became the home of Caerphilly Municipal Club in 1993. Look up to see the original name written across the frontage. The old advert, shown here thanks to Mike Thomas, dates from before the First World War. 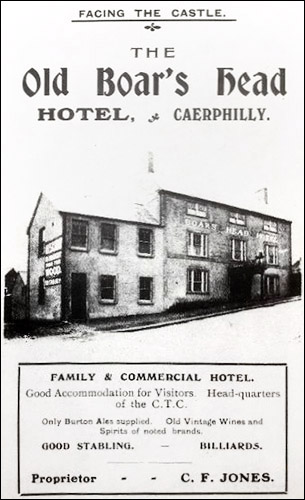 When the inn was auctioned in 1805 it had a brew house, coach house, stables and gardens. It was “an established and well-accustomed house” by then. A meeting was held here in 1814 to establish a regional branch of the Bible Society.

Eisteddfodau were held at the Boar’s Head in the 1840s. Prizes in 1848 were given for singing and essay writing, and to a newspaper editor for his recent writing in “defence of the Welsh females”.

Joan Williams was landlady of the Boar’s Head in the early 1850s. Her husband Zephania had been exiled to Australia for his part in the 1839 Chartist protest in Newport, where at least 22 people were killed by soldiers. Zephania was reputedly sheltered at Tŷ Meddyg, near the Boar’s Head, before his arrest. That was home to Dr John Llewelyn, Joan’s brother.

Joan left the hotel in 1854 to emigrate to Australia with her daughter and other relatives. By then Zephania had developed collieries in Australia. Joan was accompanied on the voyage by 38 colliers, a blacksmith and an engineer, and the mothers of two of the workmen – both in their 70s.

Boar’s Head landlord Evan Evans died in May 1857 after being thrown from his horse-drawn “dog-cart”. He had been returning from Cardiff when his horse took fright.

During the Second World War, the Boar’s Head was the favourite meeting place of American General Infantrymen. Hundreds of GIs were stationed in Caerphilly in the build-up to D-Day in 1944 (when the Allies began to recapture France from the Nazis). They were mostly in the 756th and 757th Railway Shop Battalions and the 634th Quarter Master Laundry Company. Some married women they had met in Caerphilly.