Telegraph and telephone cables to Ireland once came ashore at this secluded inlet. The General Post Office installed its first telegraph cable between here and Newcastle, in County Wicklow, in late 1886. 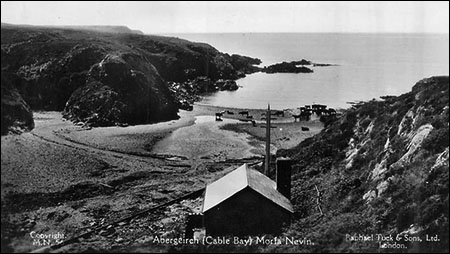 A telephone cable was laid in 1913 between Abergeirch and Howth, near Dublin. At (74 miles) in length, it was the world’s longest undersea telephone cable at the time of its completion.

Previously telephone messages between Great Britain and Ireland went via an undersea cable between Scotland and County Down, a circuitous route for most traffic. Having successfully laid a cable between England and Belgium, the GPO decided on a shorter route for communications across the Irish Sea.

After the outbreak of the First World War, troops from the Royal Welsh Fusiliers 6th Battalion were posted to Abergeirch to guard the cable station. On Christmas morning 1914, each soldier received a parcel which included a Welsh-language Bible, cigarettes or a pipe and tobacco, chocolate, a shirt, socks and other items. The gifts were from women in Caernarfon, Bangor and Anglesey and Queen Mary’s Needlework Guild. 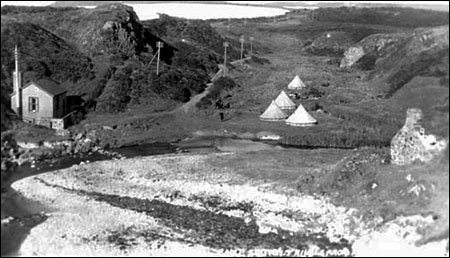 When the Irish Free State was established in 1922, the Abergeirch station was still handling communications via three telegraph cables and the telephone cable. The old postcard shows the cable station, with cattle on the beach beyond. The lower photo, copyright Gwynedd Archives Service, shows the telegraph poles and wires which led to the station.

Objects from shipwrecks sometimes washed ashore in Abergeirch, including the occasional human body. In 1900 the sea delivered casks of whisky to the shore from the sailing ship Embleton, which had been sliced in half by a Cunard liner and sank with the loss of 11 crew members. Coastguards later found 26 casks hidden or buried along this section of the coast. One old woman said she would hand surrender her cask only if she got £40, but the chief Customs officer ordered her to hand it over or get 40 months in jail!