This original section of this inn dates from the 18th century and faces the church and the road to Beaumaris. The part facing the main road was added in Victorian times. 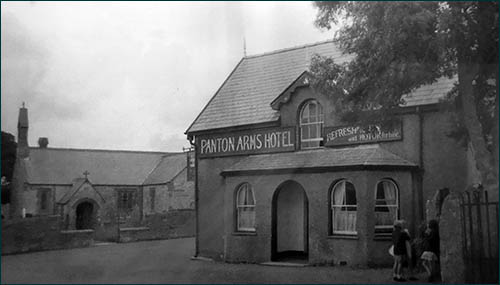 The pub is named after its original owners. The Panton family was influential in various parts of North Wales in the 18th century. Its connection with Pentraeth began when lawyer Paul Panton married Jane Jones in 1756. She had inherited Plas Gwyn (south east of the Panton Arms) from her father. She died, aged 38, in 1764. Paul’s friends included the travel writer Thomas Pennant and the Morris brothers of City Dulas, Anglesey.

In December 1813 a meeting was held “at the house of John Jones, known by the sign of the Panton Arms”, for local people to claim rights to “commons and waste lands” across a swathe of Anglesey, including Pentraeth, Llangefni and Cerrigceinwen. Parliament had authorised the enclosure of land. Anyone who failed to make a claim in writing or attend the meeting would be “totally barred and excluded” from the land.

Mary Elizabeth Panton of Plas Gwyn married Charles Vivian, 2nd Baron Vivian, in 1841. Their son Walter became manager of the Dinorwig slate quarry. In 1891 she was living at Plas Gwyn with a large staff. Two years later, her tenants attended the annual audit of rents at the Panton Arms and thanked her for reducing rents by 10% to help them in difficult times. Members of the Plas Gwyn families are commemorated in the church opposite.

The Panton Arms’ licensee in 1910 and 1911 was former slate quarryman John Thomas, a famous tenor. Known as Tenorydd y Bryniau (“the tenor from the hills”), he performed in the USA in 1889. During the Great Stike at Penrhyn slate quarry, Bethesda, he toured with a quarrymen’s fundraising choir and sang solos. He married in 1910, aged 56, and left effects worth over £500 to his widow Jane on his death in 1918.

With thanks to Dr Hazel Pierce of The History House