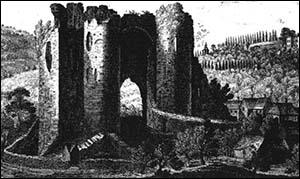 When the Normans first arrived in the Vale of Neath they built a motte (fortified mound) on the west bank of the River Nedd, near the site of the later abbey. This castle’s precise location has never been found. It’s estimated the castle was built between 1114 and 1130. Neath takes its Welsh name Castell-nedd from this castle.

By 1185 a castle of earth and timber stood on the present site. It was attacked repeatedly by the Welsh and largely destroyed in 1231. Three years later a replacement stone castle was wrecked and its garrison slaughtered. Another attack, in 1258, destroyed most of the town that had grown up around the castle. St Thomas’ Church was built near the castle for the convenience of Norman Lords and retainers.

King Edward I visited the restored castle on a tour of South Wales in 1284.

Gilbert de Clare built the present castle in 1299. He appointed a Constable of Neath Castle (a post held by the Mayor of Neath today) with a garrison of four soldiers and eight crossbowmen. Twin towers flanked the entrance, accessed by a drawbridge over a deep pit. Another large tower protected the east wall opposite.

The whole castle had a D-shaped plan. The straight edge of the “D” paralleled the river, which formed a defensive moat. A small gate gave access, via steps, to a quay where ships could deliver supplies under the castle’s shelter. 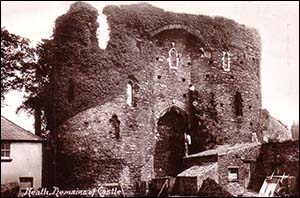 The castle was held by the powerful Despenser family during the revolt of the barons against King Edward II. The Earl of Hereford’s forces attacked and damaged it in 1322. Edward II took refuge here before his death, in or after 1327.

In 1404 the repaired castle was still viable, but over succeeding centuries it was abandoned as a habitation and became a source of building stone for the developing town. The drawing above shows the castle around the 17th century. The photo on the left shows the castle before the adjacent houses were cleared in the 1950s.

During the 18th century a cock-pit was dug in the central court-yard. Stone tiers were provided as seating for people to watch roosters fight.

The castle’s remains have been preserved by Neath Town Council. Follow the link below for opening times.