You are here: Home » Structures » Anglesey » Holyhead: The Stanley Embankment

The historic A5 road crosses the water between Anglesey and Holy Island on this causeway. Its construction resulted in an unusual marine environment, known as the Inland Sea, forming to the south.

Previously road traffic and pedestrians had to use the Four Mile Bridge, over the narrowest stretch of water, but engineer Thomas Telford’s task was to provide a direct and speedy route for mail coaches between London and Holyhead. To cut out a detour of about 6km, he designed an expensive embankment across the Stanley Sands, named after one of Holyhead’s most influential families. The embankment is 1.2km long. It was built in just one year and opened in 1823. 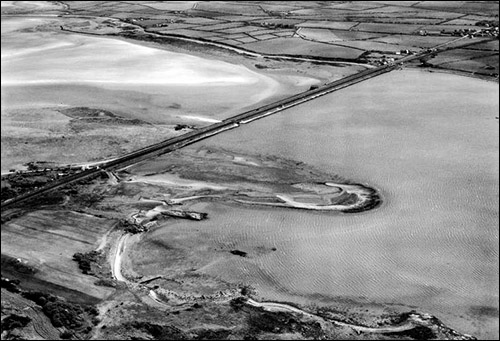 Stanley Embankment in 1953, courtesy of the RCAHMW and its Coflein website

Road users paid a toll at the western end of the embankment. The toll house still stands but was moved a short distance in the 1960s.

The embankment was widened in the 1840s for the Chester & Holyhead Railway’s tracks. The railway is behind the high stone wall to the south of the road. Beyond the railway is a second embankment, a rock causeway constructed at the start of the 21st century for the A55 dual-carriageway.

The aerial photo, courtesy of the Royal Commission on the Ancient & Historical Monuments of Wales, shows the embankment in 1953. It is from the Aerofilms Collection of the National Monuments Record of Wales.

Culverts under the embankments allow seawater to flow from one side to the other. The Four Mile Bridge forms a similar constriction 2km further south. The result is that the water between the structures has a narrower tidal range than the sea beyond. The Holy Island Strait, commonly called the Inland Sea, is also fed by freshwater from small streams.

The enclosed nature and interesting currents make the Inland Sea a popular area for boating and kayaking, but a boat trip there by a family group with two guests nearly ended in tragedy in 1904. They went too close to the bridge under the railway, where the powerful current capsized the boat. Fortunately the LNWR’s 6pm train from Holyhead passed soon afterwards. Some of the passengers saw the boat through the carriage windows, stopped the train and hurried to the rescue. Ferry steward Willie Jones swam with a rope to the boat, which was hauled ashore about 30 minutes after turning over.