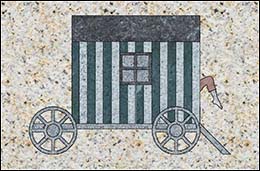 This granite postcard on the prom at Colwyn Bay relates to the original promenade. The prom improved access to the beach for visitors, formed a thoroughfare along the shore and kept rough seas away from the railway embankment.

Sections of the prom were built at different times, from the 1870s onwards.The old photo below of the Rhos-on-Sea end of the beach shows how the seafront looked before the prom.

Following a landslip, in

1890 the London & North Western Railway reinforced the foot of the embankment between the completed promenade and the railway station. In July 1896 the urban district council held a ceremony to mark the start of work on a new section of sea wall and prom, which was illuminated by electric light from the start.

The granite postcard depicts a Victorian bathing van (visible in the photo below right). Well-off visitors would change into and out of their bathing costumes inside the vans.

many bathing vans that they blocked one end of the prom outside the holiday season. He claimed that the prom was unfit to walk on, “excepting a narrow footpath on which are placed a few seats”.

By the early 21st century the beach level had dropped, exposing the Victorian sea wall along the prom to pounding waves. In 2008 auditors warned that the wall could fail, resulting in damage to the railway, A55 and coastal properties. In 2010 a storm undermined a 160-metre length of the sea wall.