You are here: Home » Structures » Denbighshire » Llantysilio: The Horseshoe Falls

This weir has been a popular beauty spot since Victorian times. It was built to supply water to the Ellesmere Canal, which transported bulk goods to the Wirral. 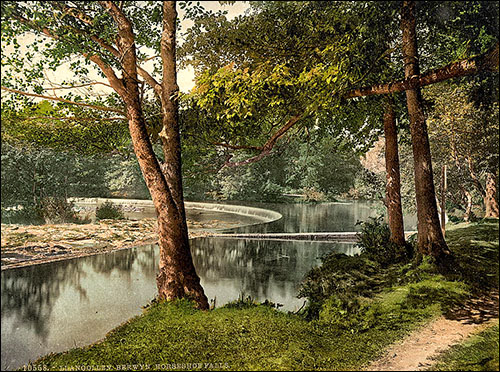 Initially the plan was to build a narrow feeder channel from here to Trevor, near Pontcysyllte aqueduct, but the canal directors agreed to make the Llangollen branch navigable for most of its length. The branch was built from 1804 to 1808 under the supervision of engineer Thomas Telford.

The weir may have become known as the Horseshoe Falls because of its shape, although it has a flatter curve than a horseshoe.

In the late 19th century a long piece of wood, about 30cm wide, floated on the water here to deflect floating debris away from the canal intake. It was fixed at one end. It’s visible in the photo, taken c.1890.

Some trippers couldn’t resist the temptation to walk along it, ignoring a warning sign nearby, if they weren’t spotted by the “waterman” in charge of the sluice. Local residents took a dim view of such “unheeding folly”.

In 1897 Arthur Frost, a Birmingham tradesman, dashed into the water to rescue Elizabeth Marshall. She and a male companion had fallen off the baulk. They were members of a Birmingham congregation on its annual picnic. Elizabeth was taken to a post office semi-conscious but soon recovered enough to return home. Her companion swam ashore, “terribly exhausted”.

Since 1947 the water abstracted from the river here has been measured in the nearby water-meter hut. Today the canal is looked after by the charity Glandwr Cymru the Canal & River Trust in Wales, and continues to feed Hurleston reservoir near Nantwich, Cheshire.