The Wales Coast Path follows the eastern shore of Y Foryd, the short estuary of the Gwyrfai and Carrog rivers. Opposite is a peninsula with Fort Belan at its tip. 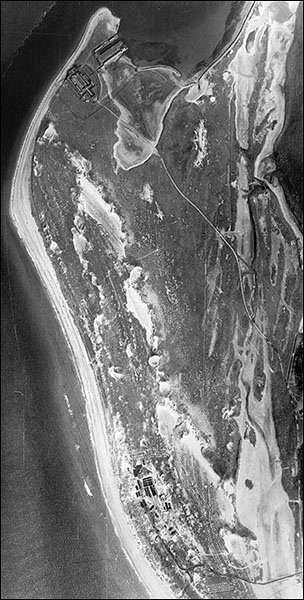 >Moryd is Welsh for estuary (it mutates after the definite article). Y Foryd is a Local Nature Reserve. The mudflats and sand are sheltered by land on all sides, including a spit known as Penrhyn Mulfran which narrows the estuary’s mouth. Mulfran = cormorant. Indigenous and migratory birds feed here in large numbers, including flocks of c.5,000 widgeon.

Fort Belan was built in the 1770s by local MP and landowner Thomas Wynn in response to a perceived threat to the British mainland during the American War of Independence. Here he garrisoned soldiers of the Caernarvonshire Militia. The fort had a battery of cannons.

The fort became a private home in the 1820s. The nearby dock initially accommodated the family’s yacht.

During the Second World War, Fort Belan was used by the local battalion of the Home Guard and by RAF crews manning fast launches in case aircraft from local airfields ditched in the Irish Sea or Menai Strait. The August 1945 aerial photo, courtesy of the Welsh Government, shows the fort at the top. At the bottom is the wartime gun battery which defended the coast and nearby RAF Llandwrog airfield. The grey dots alongside it are craters from removal of a minefield – part of the area’s wartime anti-invasion measures.

After the war, the Allies confiscated thousands of deadly German munitions containing the nerve agent Tabun. Some 71,000 of these lethal devices were stored in hangars at the airfield – see the photo on our page about RAF Llandwrog – until they were loaded in small batches onto a Royal Navy landing craft near Fort Belan. The ordnance was shipped to Cairnryan, Scotland, where it was transferred to a cargo ship for dumping in the Atlantic, 400km west of the Outer Hebrides. The procedure, known as Operation Sandcastle, was completed in 1955.

The Wynns sold the fort in 1992 to the Blundell family, which used it as a base for marine biology exploration. Since 2004 the Friends of Belan Association has been helping to restore the fort and dock. The site has self-catering accommodation and is a wedding venue.