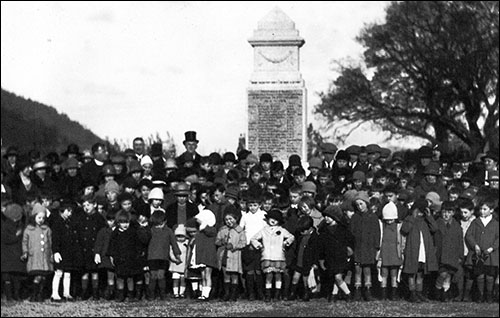 The small cenotaph at the riverside in Trefriw commemorates the local men who died in the First and Second World Wars. To discover who they were, choose a category below.

The memorial was built by William Hughes, of Llanrwst. The land where the war memorial was originally located was donated by Mrs Kate Williams, of Plas Meirion, Trefriw. It was a little further down Gower Road (further away from the village), near the children’s play area.

The old pictures show the memorial in its original setting, before it was moved to its current site in the 1970s. One shows a group in 1925, commemorating the Armistice.

Among the men named on the memorial are the Ellis brothers. Trevor Edgar Ellis died the day after David Ithel Ellis in 1918.

Three Slater brothers died within five months of each other. One of them, George Edwin, longed to see the baby daughter his wife was carrying in 1915 but she was born the day after he was killed in France. 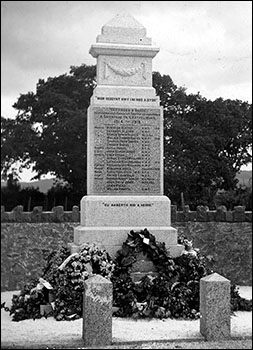 With thanks to Adrian Hughes of the Home Front Museum, Llandudno, to Valerie Hannah, and to the Aneurin and Gladys Hughes photo collection, Trefriw Historical Society