In memory of Bertram, Ernest and George Slater 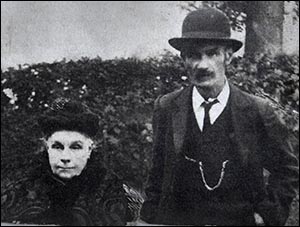 John Edwin Slater and his wife Hannah lost three of their five sons in the space of five months in 1915. The couple are pictured left c.1915. They lived at 10 Victoria Terrace, Trefriw. Earlier they had lived in South Wales, then Lloc, near Holywell, Flintshire, then Llanrwst.

Bertram was born in Ogmore Vale, near Bridgend. He enlisted in the army at Bridgend. Ernest was born in Holywell and enlisted at Colwyn Bay. Both served with the Royal Welsh Fusiliers and were sent to Turkey to take part in the ill-fated attempt to seize the Gallipoli Peninsula in 1915. Bertram was wounded, and died on 20 July 1915. Shortly later, on 7 August, Ernest was killed. Both are commemorated on the Helles Memorial at Gallipoli.

George Edwin Slater was born in Caerwys parish, Flintshire. He married Catherine Davies, a domestic servant in the Llanrwst area. They were living in Denbigh by the First World War.

He enlisted at Bargoed, in South Wales, under the surname Davies. Serving with the Welsh Regiment, he was moved in early November 1915 to the Western Front in France, where he was killed on 11 November 1915, aged 34. He was buried at Le Touret Military Cemetery, in the Pas de Calais region of France.

He had recently visited Catherine and their four children in Denbigh. She was expecting a fifth child, whom George longed to see. The baby girl was born on the day after his death and named France, after the country where George had fallen. France died a year later of meningitis.

A fourth brother, called John, served and was badly wounded. He was treated in Malta and survived the war. The fifth brother, Albert, was a prisoner of war in Germany for seven months until the end of the war.