Goods going to or from Llangollen were once handled here. The stone-built warehouse is thought to date from the early 19th century, when this section of the canal was built. A crane for loading and unloading boats survives. 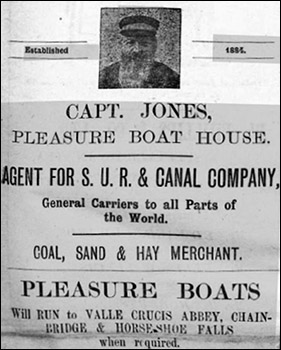 The wharf’s hillside position wasn’t ideal for carting heavy goods, but the canal’s main purpose was to supply water to the canal at Trevor at the same elevation as the towering Pontcysyllte aqueduct. Originally a narrow feeder channel from Berwyn to Trevor was planned. The canal company changed its mind and invested in making the channel navigable for most of its length.

The canal was largely eclipsed as a goods carrier after the railway opened in the 1860s, but by then the canal was attracting the attention of visitors. In 1869 a local newspaper observed that a “very neat and long pleasure boat” sometimes visited Llangollen Wharf from Froncysyllte in the evenings, and suggested the town would benefit if similar boats could be hired here.

Horse-drawn boat trips from here were launched in 1884 by Captain Samuel Jones, who previously sailed ships across the globe, as far away as Singapore, Australia and the Americas. He started with two surplus lifeboats from a liner docked at Liverpool. He entertained canal trippers with stories from his seafaring days if he happened to be on the boat himself.

By 1887 Samuel was running day trips by boat to Chirk, with refreshments served on board, as well as short trips to Berwyn. The 1905 advert shown here describes him as a merchant and agent to the canal company, offering carriage “to all Parts of the World”. He died in 1908. 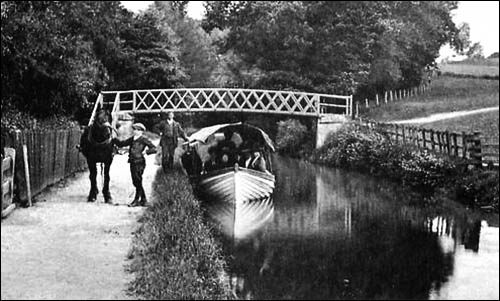 The old photo shows a horse-drawn excursion boat near Trevor in the early 20th century.

In 1910 the business was run by Isaac Roberts, who named some of his boats after glamourous ocean liners including the Mauretania and Lusitania. He named his large new boat Titanic after the ship which was then under construction in Belfast and was to sink disastrously on its first voyage.

Today Llangollen is one of the few places where you can experience the tranquility of a canal trip using the canal system’s original form of motive power. The old warehouse is now occupied by the boat-trip company, with adjoining stables for the horses.