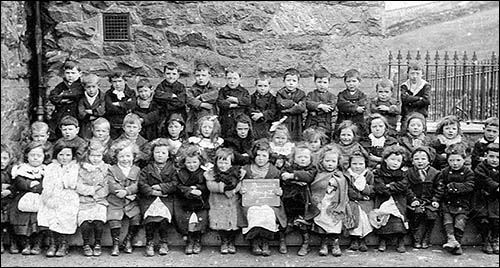 In the early 19th century a Nonconformist Sunday School was established in nearby Fachwen. Pressure grew for local children to receive all of their education in a permanent British School (or Brythonic School), which eventually opened in 1844 with assistance from John Phillips. He hailed from Ceredigion and had studied at Edinburgh University. He became a Methodist minister in 1837. Posted to Bangor, he worked enthusiastically to establish British Schools as alternatives to the Anglicans’ National Schools.

Some of the Dinorwig school’s pupils emigrated to the USA. Thomas L Williams of Hastings-on-Hudson, New York State, reminisced in 1918 about the animosity between the school’s Dinorwig and Fachwen children. 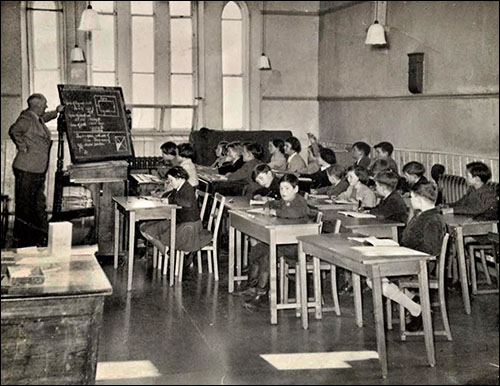 The Dinorwig boys had numerical superiority in snowball fights. One day they were led by a teacher, who was hit by a ball of hard, compacted snow off the footpath. The teacher couldn’t catch the boy who’d thrown the snowball but started to beat Thomas, as a representative of the Fachwen crew. Thomas realised he could get the better of the man. Having given the teacher a drubbing, he was established as the school bully, a title he relished at the time.

Thomas also recalled the annual tea party. Led by the Llanrug band, the children would walk to Blue Peris, home of quarry supervisor John Davies, where they received sweets or apples. Then they visited quarry doctor Thomas Hughes at Hafoty (he lived there 1875-1890) for more snacks, followed by Bron Elidir, home of quarry steward William Parry. Back at the school, they gorged on bara brith and tea.

Later Humphrey Evans was the headmaster. He was a friend of the blind Methodist minister John Puleston Jones. According to the minister’s biographer, the pair once walked 76km (47 miles) from Dinorwig to Bala, through mountainous Snowdonia, on a hot summer’s day! At his leaving ceremony here in 1905, Humphrey received a gold chain from the chapel congregation and a bible and hymn book from his Sunday School pupils.

The slate quarry’s closure in 1969 resulted in more families moving away, and the school closed. The building was used as a community centre with a creche. Activities included weightlifting and choir practice. It was empty for about a decade before it was purchased in 2014 and renovated. It opened as the Lodge Dinorwig café and hostel in August 2015 – see website link below.