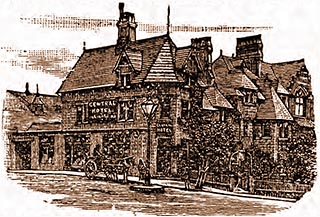 The Station Hotel was built c.1870. The main frontage faced Station Road, where you can still see the complex pattern of bay windows, hipped roofs and chimneys. For many years, the Station Hotel and the Imperial Hotel were the only buildings on this side of Station Road and were separated by farmland.

The architecture didn’t please the authorities in the 1890s, because the building had six entrances. Being drunk in a pub was an offence but whenever a policeman entered through one door, drunks could stagger out through another!

Work began in 1906 on extending the hotel along Conway Road. The newer section is left of today’s main entrance. Notice the Art Nouveau stained glass windows there. The alterations cost c.£3,000.

During the work, builders working for George Roberts of Llandudno uncovered a well, almost 10 metres deep, which had been forgotten. It no longer contained water. Mr Roberts lost a lot of money on the building contract, and his business went bankrupt in 1907.

When the Station Hotel was sold at auction in 1888, it included livery stables, warehouse, bottling stores and an adjoining building called Central Chambers, where licensee William Price had his offices. The hotel was bought by John Owen, who had previously run hotels in Llandudno Junction and Caernarfon.

He changed the hotel’s name to the Central Hotel by 1891, when a homeless man who had previously been a barman here was charged with stealing a gold watch from a Colwyn Bay woman. She had taken pity on him and given him food and lodgings at her home.

After Mr Owen became bankrupt in 1891, the hotel was owned by the Soames brewery of Wrexham. It was advertised as an importer of Australian and other wines, and a bottler of ale and porter. Guinness was available “in wood and bottle”. The Soames brewery sold the hotel for £10,000 in 1900 to brewers Ind Coope and Co.

In April 1896 the Central Hotel provided beds for a night for the exhausted crew of a schooner which came close to sinking. An estimated 2,000 people had thronged to the Colwyn Bay seafront to welcome the Llandudno lifeboat as it brought the crew shore.

From 1908 to 1915 the electric tramway to Llandudno terminated outside the Central Hotel. Click here for details and photos, or here for information about a tram picture in granite on the promenade.

The building remained a hostelry through the 20th century but had become dilapidated by the early 21st. It reopened, under its original name, in 2015 after a £660,000 refurbishment, partly funded by the Townscape Heritage Initiative. New licensees Rita and Keith Stuart contributed £100,000 towards the renovation.