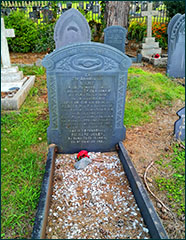 Mary Jones and her husband Richard lost a son in Belgium in the First World War and another – who was a caretaker of war graves – in France during the Second World War.

The couple lived in Wexham Street, Beaumaris. Richard worked as a plasterer.

Their second son Robert, known as Bobbie, worked as a labourer and worshipped at Capel Seion. He joined the Royal Welsh Fusiliers as a Private and died on the Western Front in Belgium in October 1916, aged 21. He is buried at Essex Farm Cemetery, near Ypres.

Mary died, aged 66, in November 1939, shortly after the outbreak of the Second World War. Richard passed away five years later, aged 88. The couple’s gravestone includes commemorations of Robert and of their son Edward.

Edward worked for the Imperial War Graves Commission (IWGC), which looked after masses of First World War graves. He lived in northern France and had at least one child with his French wife, Andrée.

Edward was the passenger in a lorry which hit a tree on the Arras Road in March 1940. Edward and the driver were killed and two French passengers seriously injured. Edward was 40 years old and buried in Warloy-Baillon, in the Somme region.

A third son, Griffith, also lived in France and worked for the IWGC. He married one of Andrée’s sisters and died in 1947, aged 43.