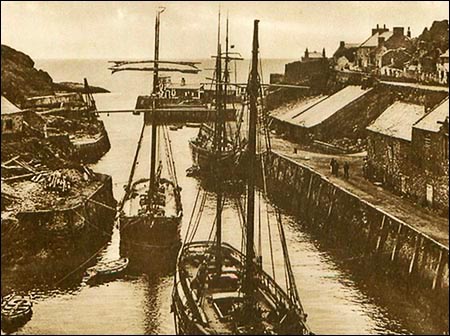 Along this side of Amlwch harbour, large compounds known as copper bins were built in the 18th century to store copper ore awaiting shipment. The bins included the stone building where you now see the Copper Kingdom visitor centre. The arched doorway into the centre originally gave access to the ore. Higher up, you can see a definite line where the original wall was later extended upwards.

Some of the bins were roofed while still in use for copper storage. The roofs are visible in the upper right quarter of the old photo. Horse-drawn carts carried the ore from the copper mines to Pen Cei, the road on top of the cliff behind Copper Kingdom. From there the ore was tipped into the bins.

You can see other former bins along the road on either side of Copper Kingdom. The combined volume of these compounds gives you an idea of the scale of Amlwch’s copper industry after a particularly rich seam of the metal was discovered on Parys Mountain in 1768. The Parys mine and nearby Mona mine soon became the world’s biggest producers of copper. Much of the ore was transported around the west coast of Wales for smelting in Swansea, which was known as “Copperopolis”. In 1793 Parliament authorised the enlargement of Amlwch’s harbour, to reflect the growth in shipping here.

Copper Kingdom opened in 2012 to give visitors and local residents an insight into Amlwch’s industrial heyday. Inside the visitor centre you can view a re-creation of a section of underground copper mine and listen to different historical characters as you walk through the museum. The centre was developed by the Amlwch Heritage Trust and Menter Môn, with help from Cadw and the Heritage Lottery Fund.