The coves each side of this promontory have provided useful harbours for countless generations.

Prehistoric objects found in this vicinity include the butt half of a Neolithic axe head, from Penmaenmawr, and a Bronze Age rapier (sword). A palstave – a form of axe head – discovered on the beach at Porth Ysglaig, east of Porth Ysgaden, is thought to date from c.1100 BC (late Bronze Age).

In more recent centuries, Porth Ysgaden was a vital gateway for residents of this remote area. Boats and small ships brought iron, sugar, tea, salt, clothing, tobacco, coal and other goods. They took away local produce, including salted herring. Ysgadan is a Welsh name for herrings.

The cart in the 1886 photo of Porth Ysgaden (courtesy of local history website Rhiw.com) appears to be moving a delivery of limestone, which was burned with coal near the beach. You can see the well-preserved limekiln at the north end of the car park. The kiln was built into the sloping land for the raw materials to be loaded at the top and the lime – used for fertilising fields – removed from the bottom. 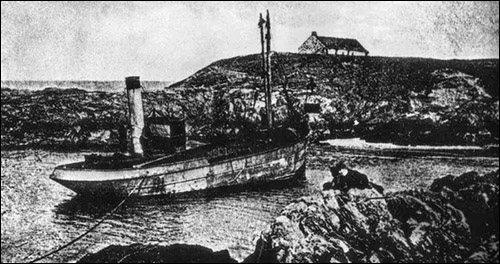 In the 18th century a customs officer lived in the cottage whose surviving gable wall you can see on the opposite side of the inlet from the car park. It’s thought this once functioned as a lighthouse. When the building wasn’t housing a customs officer, the landowner, the Cefnamlwch estate, required tenants to keep the windows clean at all times. This may have been an aid to smuggling! Records from the 16th century reveal collusion between the Cefnamlwch gentry and pirates.

The last occupants were brothers John and Hugh Daniel, coal merchants until 1935. They moved out after their sister Elinor fell to her death down the nearby cliff. The cottage is visible, beyond the small steamer, in the lower photo (also courtesy of Rhiw.com).

In February 1900 a storm blew a ship, travelling from Dublin to Caernarfon, onto the headland at Porth Ysgaden. Its three crew members couldn’t reach land for seven hours. Eventually they were carried to safety across the rocks by Evan Williams of Porth Gwylan, who was praised for his bravery and effort. This atoned for his mistake four years earlier, when he was fined for keeping a dog without a licence!