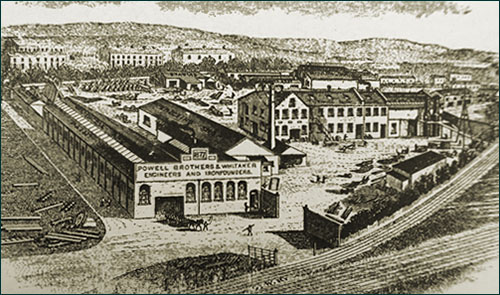 Wrexham’s Jewson outlet occupies the site of the Cambrian Ironworks, which hosted a munitions factory in the First World War and afterwards produced motorcycles – see below.

The ironworks was founded by John Evan Powell and Robert John Powell in 1876, joined by John Whitaker in 1877, with premises ideally placed next to Wrexham General station. The firm exported its award-winning agricultural machinery to many countries. You can see some of its farm machines at the National Trust’s Erddig Hall and outside the Bersham heritage centre.

The factory had its own football team. The old drawing shows the factory from the north west.

John and Robert were Calvinistic Methodists. John, a magistrate, sat on committees addressing local poverty and represented Denbighshire on the Central Welsh Board, which oversaw inspections of schools. He chaired the governors of Grove Park County School and the Wrexham Liberal Association. Powell Road is named after him.

During the First World War, Wrexham’s National Shell Factory was established here, employing 220 women and 36 men. It produced up to 12,000 18lb shells per week. Its women’s football team played at Wrexham Racecourse to raise funds for the town’s two military hospitals; no doubt the workers saw hospital trains bringing wounded servicemen to the General station. Money was also raised by a ladies’ Tug O’War team and a fete featuring sports and musical competitions.

After the war the Powell Brothers placed prominent adverts in the local press to find employment for the women workers. The company reverted to producing farm machinery. In 1920 it diversified into motorcycle manufacture. The first model had a 4HP rating and featured a large external flywheel. It was designed by Edward Burney, who had learned about motorbikes as a dispatch rider in the war. 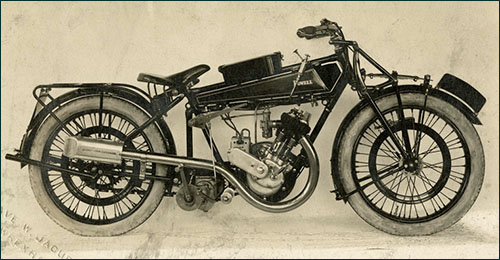 Other models included ones designed for women and a three-wheel motorbike with sidecar (passenger seat). The company had an agent in Paris. Many bikes were built here before the global economic depression forced the company to close in 1927. The site was taken over by Rogers and Jackson, selling building materials and homeware.

With thanks to Georgina Gittins, and to Wrexham CBC for the images. Sources include the National Library of Wales,’The Story of Powell Brothers and Whitaker’ by Gwynfor Williams, and cybermotorcycle.com

More about Powell motorcycles at cybermotorcycle.com