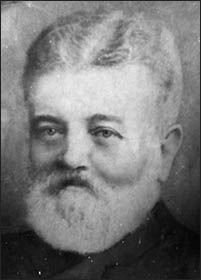 The church at Pentraeth is mentioned in records from 1254. The current building includes some medieval stonework. It was expanded in later centuries and restored at various times in the 19th century and in 1910.

In the churchyard stands a small building which housed the local hearse and is thought to date from the 18th century or early 19th.

Joseph Griffiths, rector of Pentraeth from 1878 until his death in 1894, was also the rural dean and an inspector of schools. A graduate of Jesus College, Oxford, he is pictured right. His son Harry was a medical doctor in Porthmadog before becoming a Lieutenant in the Royal Army Medical Corps in the First World War. Harry died at a Shropshire army camp in 1916 aged 50.

In 1909 the body of sailor Lewis Hughes was brought here after a ketch was wrecked at Red Wharf Bay while trying to land a cargo of coal from Connah’s Quay at Llanddona. The men of the Penmon lifeboat braved the storm but the ketch’s three crew members refused to be rescued and drowned. Lewis’ body was found, still tied to the mast. Following his inquest, the body rested here for a night before going to his native Holyhead for burial. 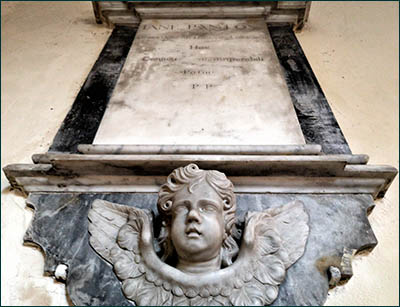 Inside the church are memorials to people connected with the nearby Plas Gwyn estate, including members of the Jones and Panton families who lived there in the 18th century. The photo on the left shows the memorial to Jane Panton (nee Jones), who inherited the Plas Gwyn estate from her father and died in 1764 aged 38.

There is also a memorial to Charles Crespigny Vivian, 2nd Baron Vivian, who married into the Panton family in 1841. He was a Whig politician and ambassador. His granddaughter Dorothy married Earl Haig, the controversial leader of British forces in France in the First World War. You can read more about the family on our page about the Panton Arms, opposite the church.

The village’s First World War memorial is set into the boundary wall. There are two official war graves in the churchyard.