This house beside the Llangollen Canal was erected in the early 19th century for the manager of the nearby limekilns, which are now in the house’s garden. It’s a private residence – please don’t enter the grounds. The old photo on the right shows the house from the far side of the river. 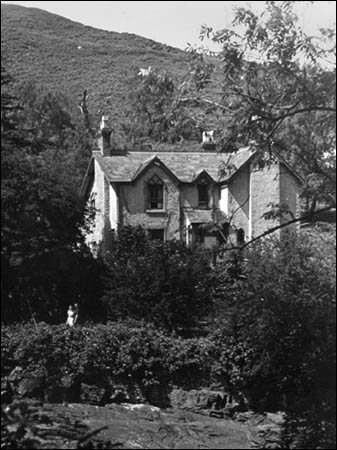 Lime removed from the base of the kilns was carted along the riverbank below the house, then up a ramp to towpath level. The ramp still exists in the garden.

Tŷ Craig is Welsh for ‘rock house’. The canal engineers cut through a shoulder of slate rock here, leaving a pillar of rock between the towpath and the ramp. The pillar disappeared long ago. Slate was quarried a little downstream on the opposite side of the canal was quarried c.1900. The pillar might have been quarried at the same time.

Exuperius Pickering, who built the kilns and house, also created a canal wharf by the house’s north wall (see lower photo). Here goods were transferred between boats and carts. The wharf was connected to the main London to Holyhead road (now the A5) by a cart track which led to the chain bridge, also built by Exuperius. The track is now the road to the Chain Bridge Hotel.

Notice that the nearby canal bridge has no space for the towpath underneath. The canal upstream of here was a feeder channel, never intended for boats. The stone bridge replaced a lifting bridge, which crossed the canal at the same level as the towpath.

A Victorian map labels Tŷ Craig as the Ship Inn. When it was auctioned in 1863 the inn was described as a beerhouse with a garden, wharves and four limekilns.

In the early 20th century Tŷ Craig belonged to John Slater Esquire of Blundellsands, near Liverpool. In 1905 the house was “profusely decorated” for the arrival of John’s daughter Lucy after her wedding in Blundellsands. Cannons were “fired at intervals” to greet the newlyweds, who later left for their honeymoon in Germany.

With thanks to John Pickering and Chris Kelly