In memory of William Hughes 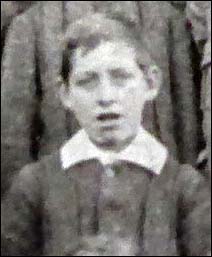 William Hughes was born in 1886, writes great niece Mari Hughes. He lived at Pant Llawr, on the outskirts of Gwalchmai, with his parents, Mr and Mrs John Hughes. William had three brothers, Richard, Tom, John, and three sisters, Fanny, Elin and Margaret.

The family moved to live at Pwll Llif, a small cottage within the centre of the village. The sideboard from the family home, along with William’s British war campaign medals 1914-18 (pictured below), remain as family heirlooms.

William attended Gwalchmai British School. A picture (see left) of William c.1895, when he was nine or 10 years old, with his school peers is understood to be the only remaining photographic image of him. 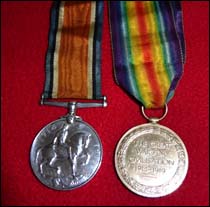 William served in the First World War as a Private with the Royal Welsh Fusiliers. He returned from the War in 1919 but sadly passed away from his wounds at Pwll Llif on 28 July 1921. He was 35 years old. He is buried at St Morhairan Churchyard, Gwalchmai.

William’s brother Tom, who was a jockey, and their father John Hughes, visited Australia. John returned after two months, but Tom remained and settled there, where he raised two sons.