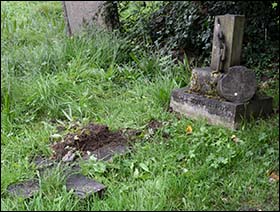 Unusually this headstone has no date of death. Instead it highlights the occupant’s three years of wartime service with HMS Scotia, for which he received the OBE.

John Fitzmaurice Pinchin was born in Tipperary, Ireland, in 1856. He became a cadet and later an officer on ships to India and Australia. While a chief officer with the Inman Line he took the 4th Dragoon Guards to Egypt. On arrival, he decided to join the soldiers! He remained with the Naval Brigade until after the Battle of Tel-el-Kebir, which secured British access to the Suez Canal in 1882.

He joined the London & North Western Railway in 1885, soon becoming a captain of the company’s ferries between Holyhead and Ireland. He was the LNWR’s commodore captain (most senior captain) for 12 years. 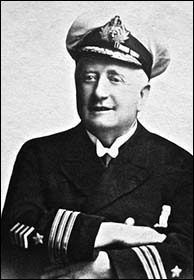 On 14 August 1914 he was commissioned as Temporary Lieutenant in the Royal Naval Reserve. On the same day one of the LNWR’s Holyhead steamers, TSS Scotia, had been commissioned by the Admiralty as an Armed Boarding Steamer. Under John’s command, HMS Scotia patrolled the Irish Sea before being dispatched to the eastern Mediterranean, probably taking part in the ill-fated attempt to invade Turkey through Gallipoli in April 1915. It also supported the bombardment of a Turkish fort from the Red Sea.

In May 1917 HMS Scotia was returned to the LNWR. During the same year John left the ship. He served as naval consul in Norway before the war ended. He was awarded the OBE in 1919 in recognition of his “valuable services” in command of HMS Scotia. The photo of him on the right is courtesy of Aled L Jones.

He died at Glyndwr, Morfa Drive, Conwy on 29 May 1929. His wife Louisa had died three months earlier. They had two children. One of them was Reginald Blennerhassett Pinchin (1887-1931), who was born in Holyhead and in 1910 joined a rebellion in Mexico.

Reginald served with the American Marines, Canadian Engineers, Cheshire Engineers, and in the First World War with the New Zealand Army on the Western Front. He was also a vaudeville artist, stage name Sarsfield. He is buried a few plots lower down from his father’s grave.