The north-south footpath here is unusual because it crosses runways of a wartime airfield! The airfield’s hangars and other buildings have been demolished but the three runways are clearly visible. The aerial photo, courtesy of the Welsh Government, shows the airfield in 1946. 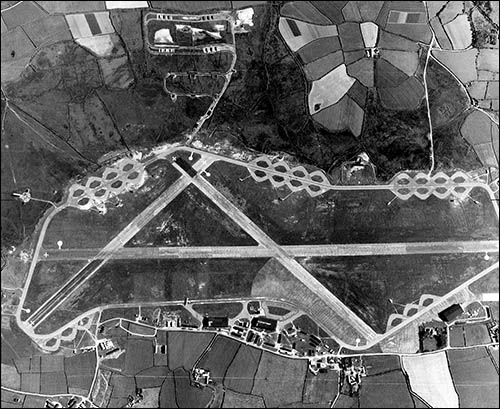 RAF St Davids was opened in 1943 for the RAF’s Coastal Command. It had three overlapping runways, allowing for landing or take-off in different wind directions. Aircraft based here included Fortress and Halifax bombers. From 1944, the airfield operated in tandem with nearby RAF Brawdy. One of the main activities was patrolling the Irish Sea to spot German submarines.

At the height of RAF operations in Pembrokeshire, almost 2,000 men and women were engaged in RAF work on the St Davids peninsula. They temporarily increased the population in this Welsh-speaking rural area. Not being able to speak Welsh wasn’t a social barrier, however, and some of the airmen married local women.

Among them was Eric Hemmingway, from Yorkshire. Before the war he had trained with a worsted-spinning company in Cleckheaton, specialising in colour matching. He found a soulmate in Betty Griffiths, whose father owned the woollen mill in Solva (which is still working). Eric and Betty married in 1944. Six years later, they took over the mill’s operation, and continued until 1986.

Gordon Cawood of Leicester was a wireless operator at RAF St Davids. He married local woman Doris Tegan. The couple settled in Llanrhian. Gordon was involved in many local events and societies. He was a district and county councillor and chaired the Pembrokeshire Coast National Park Authority (PCNPA).

After the war, RAF activities focused on Brawdy airfield. The Royal Navy used the St Davids airfield for training air crews until 1961. The site was retained as an overflow facility for Brawdy until the 1990s, when it was transferred to the PCNPA. The authority has undertaken nature conservation and rewilding work at the site.