Downstream of the southern footbridge across the Western Cleddau river is see the Old Quay. For centuries, ships used to tie up in that vicinity to deliver or take away goods and passengers. Old quayside buildings survive. The engraving of the quay c.1813 is shown here courtesy of Llyfrgell Genedlaethol Cymru – the National Library of Wales. 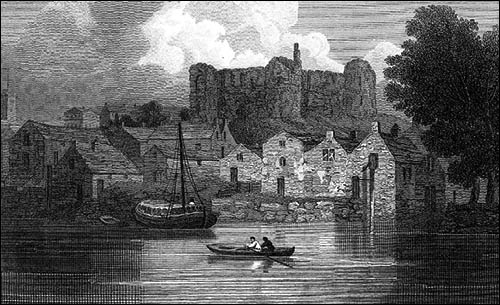 Haverfordwest was the official shipping point for textiles, hides and wool from across this region. Ships departed for ports around the British Isles before the growing railway network replaced coastal shipping. In the early 1830s, Haverfordwest was dispatching £100,000 worth of goods a year – mainly butter and corn – to Liverpool and London.

The “great key” (quay) here is marked on a 1690 map. Its rebuilding in 1777 is commemorated by a plaque which you can see on the wall of the Old Wool Market. The quay was known as Old Quay in Victorian times, distinguishing it from the New Quay and Gas Quay.

The first steamship to reach Old Quay was the Bristol Steam Navigation Company’s Frolic in October 1830. It was possibly named after Fortune’s Frolic, a popular riverside footpath in Haverfordwest. The paddle steamer plied between Bristol and Haverfordwest each fortnight until it sank in a storm in 1831. Among the passengers who drowned were children of affluent Pembrokeshire families going to Bristol for school.

The company’s vessels were still serving Haverfordwest in 1870. In 1873 the public weighing machine – where any trader could weigh a consignment of goods – at the quay was repaired.

Jacob Beer, an enterprising coal merchant at Old Quay, hired a Bristol steamer in 1886 to carry 100 people. He was later fined £5 because he had no certificate for conveying passengers and the ship was authorised to carry no more than 70 passengers.

Ships arrived from France each summer carrying onions. In 1907 there was a fight between groups of onion sellers after two ships, named Germaine and Adele, arrived from Brittany at almost the same time, which hadn’t happened before. Between them the ships carried 90 tons of onions, which were stored in Old Quay warehouses. The total of 30 to 40 onion men slept 10 to a room at the Old Quay. The sellers returned with each day’s takings to the master, and disputes often arose. The Frenchmen were good customers for Italian ice-cream men, and the hubbub reminded older residents of how the quay was before the railways.