In memory of Sidney Mayberry 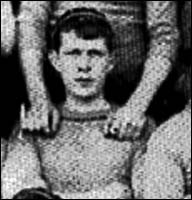 Sidney Mayberry was born c.1873. His father William was a blacksmith and lived at 3 Lewis Street, Machen, writes John Rawlins.

Sidney was a founder of the Machen Greys Football Club. He played “at forward” for the club when it won the Monmouthshire Cup two years in succession. He lived in Dolphin Street, Newport, near his workplace at the Cardiff & Newport Patent Fuel Company (Arrow Brand), which supplied large volumes of fuel to French railways during the First World War.

He was over the age limit when war was declared, but he outwitted the authorities to enlist. He arrived in France with the 5th Battalion South Wales Borderers on 17 July 1915. A year later, during the last 10 days of July 1916, the battalion was involved in hectic fighting, with heavy losses, in and around Mametz Wood – one of the most fiercely contested areas in the whole battlefield. On 25 July, the troops came under heavy shelling – “artillery of all calibres and in the evening with gas”. Sidney died that day of his wounds, aged 43.

A letter from an eyewitness to Sidney’s brother records that three of his comrades were killed while trying to carry the wounded Sidney to safety. Sidney is buried with two comrades at Heilly Station Cemetery, Méricourt-l’Abbé, Somme.