Margaret Beaufort, mother of Henry Tudor, gave money to start this church’s construction after her son became King Henry VII. Her husband, Thomas Stanley, was Lord of Mold and had helped Henry defeat King Richard III in the Battle of Bosworth in 1485. 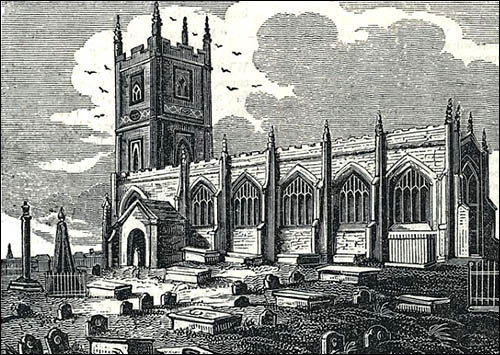 The drawings of the church are shown here courtesy of Llyfrgell Genedlaethol Cymru – the National Library of Wales. The upper one is from 1825. The lower one is by Henry Gastineau (1791-1876) and shows the church’s position above the town.

An earlier church on this site is mentioned in records dating from 1291, but the building was in disrepair by the time work began on the new church c.1490. Only the old tower was kept.

It took many decades to complete the new church. There was a shortage of funds after Margaret’s death in 1509. Two Bishops of St Asaph provided money for the further work. One of them was William Hughes. In the 19th century his initials were reputedly found on a stone alongside the date 1597, suggesting that this is when the church was finished.

A large chancel arch had been erected but there was no money for the intended chancel behind, so an east wall was built.

The tower was rebuilt from 1768 to 1773 to the designs of Joseph Turner, whose other works include Ruthin jail. 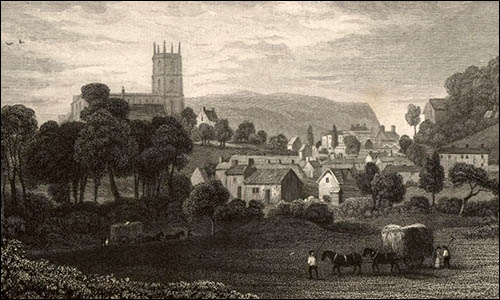 Further changes were made in the 1850s by the renowned architect Sir Giles Gilbert Scott. These included a new roof over the central aisle, designed to match the Tudor roof over the north aisle. The east wall was removed to expose the chancel arch, and a new chancel was provided.

When you view the church’s exterior, look up to see carved animals and gargoyles. Inside the church there are many crests and arms of the Stanley family. Lord Stanley had many titles including King of Mann, and Manx symbols can be seen in the north aisle.

The Lady Chapel was restored in 1921 in memory of local men who had died in the First World War.

In the churchyard is the tomb of landscape painter Richard Wilson (1713-1782), whose mother was from Leeswood. He grew up in Mold and worked in Italy and London, where he became one of the first members of the Royal Academy. His paintings of Welsh landscapes in the 1760s, including the view towards Snowdon from Nantlle, inspired other great artists.