The Millennium Plaza occupies the corner plot where a large swimming pool was opened in April 1958. The Empire Pool was constructed for Cardiff’s hosting of the Empire and Commonwealth Games.

In Victorian times and into the 20th century, the area between Cardiff Central station and Park Street was packed with terraced houses. The area was known as Temperance Town. It was developed by Colonel Edward Wood, an advocate of temperance, on land reclaimed from the river flood plain. He forbade the sale and drinking of alcohol in the area.

The housing was demolished in the late 1930s. A new bus station was built north of the railway station after the Second World War. 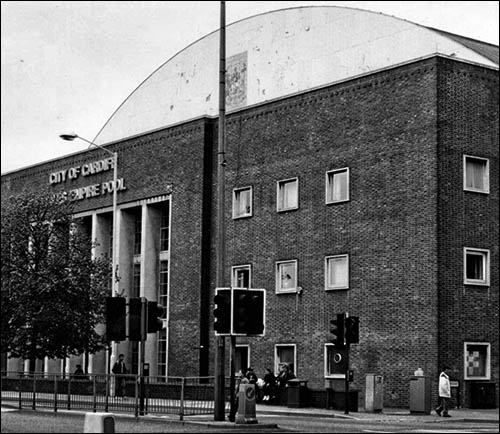 Cardiff Corporation planned to build new swimming baths at this corner site in the 1930s but the war halted the scheme. The Commonwealth Games provided a fresh impetus. Cardiff would have hosted the games in 1946 but for the war.

Construction of the pool started in 1956. The main pool was over 50 metres long. There were diving boards at one end. The building could accommodate almost 2,000 spectators, and double that number for events when the pool wasn’t needed and was covered with boards and seats. There were also Turkish Baths and other bathing facilities.

The architecture embodied the modernist fashion of the post-war era, avoiding almost all embellishment. The photo, courtesy of Cardiff Libraries, shows the frontage and the gable end of the curved roof which spanned the pool and seating areas.

The building was demolished in 1998, when part of the site was needed for construction of the Millennium Stadium (later renamed the Principality Stadium). A large plaque from the Empire Pool was moved to the new International Swimming Pool, at the south-western end of Cardiff Bay.