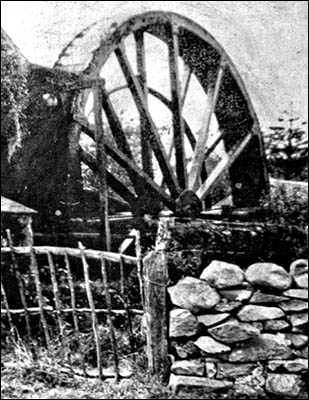 In the heyday of Welsh slate quarries, many workshops manufactured objects from pieces of slate rock which were unsuitable for splitting into roofing slates. This works, also known as the Tudor Slate Works, is one of very few to have adapted to survive into the 21st century.

The works was founded in 1861 to make slates for classrooms. Children used slates in wooden frames to learn how to write, before mass-produced paper became available. The works’ machinery was powered by a waterwheel (see photo) until 1952, when an oil engine was installed. The engine was exported to Iraq in 1960 as the works converted to electrical machinery.

In 1883 the Tudor Slate Works was fined 46 shillings for employing boys under school age and without medical certificates. This contravened the Factory Acts.

Inigo Jones & Co advertised in 1904 as an “enamelled slate chimney-piece factory” and sawmills, supplying timber to collieries and mines. The Victorian fireplace pictured was made by the works and is exhibited here. 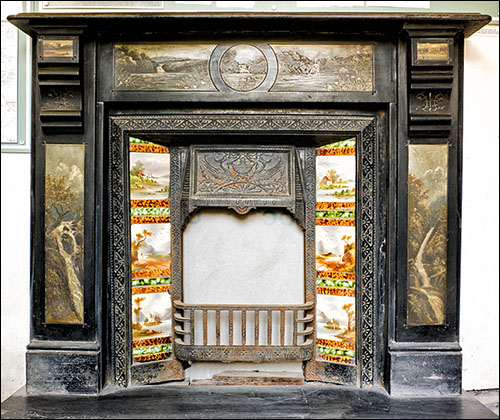 The company produced enamelled slate panels to which electrical equipment was attached. The Cunard Line used electrical panels from here in prestigious ocean liners such as RMS Queen Mary, completed in 1936 and now a hotel in California.

During the First World War, the works was used exclusively to supply components (electrical panels) for the munitions industry. In 1916 Inigo Jones, the works’ owner, asked for one of his employees to be excused from conscription into the armed forces. The worker was a slate turner, making electrical boxes. Training a replacement would take six months, but the military tribunal refused to exempt him.

Countless gravestones and other memorials have been produced here, as finished products or as blank headstones for monumental masons to inscribe. Hand-carving of letters and decorations at the works eventually gave way to engraving machines and sand-blasting equipment.

The works now uses computer-controlled CNC engravers and produces slate objects for many domestic uses, including flooring, kitchen worktops, clocks and wine racks. You can take a self-guided tour of the site to watch craftworkers in action, view historic objects and cut your own words in slate. Follow the link below for visiting details.