This building’s cellars connect to tunnels under the town. According to tradition, the young Henry Tudor used underground passages to escape to Brittany in 1471. He later became King Henry VII and established the Tudor dynasty. 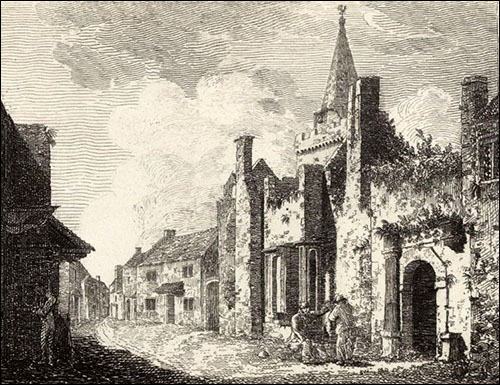 Jasperley House, home to Boots the chemists since the 1920s, has a Victorian frontage but the structure is much older. In Henry Tudor’s time, Tenby mayor and merchant Thomas White lived in a nearby town house, which was demolished in the 19th century. The ruins of his house are shown in the 1812 drawing, courtesy of Llyfrgell Genedlaethol Cymru – the National Library of Wales.

Like many others in Pembrokeshire, the prosperous White family was sympathetic to the Lancastrian cause during the Wars of the Roses. By 1471 the Yorkists were firmly in control of England and Wales. They wanted to imprison or execute Henry because the Lancastrians insisted he was the true heir to the throne. Henry and his uncle Jasper hid in Tenby, with Thomas White’s help, until the moment came for them to sail from Tenby to exile, under cover of darkness.

Walking through the streets of Yorkist Tenby would have been too risky but the Jasperley House cellars are connected to several tunnels. One passage leads beneath the road to St Mary’s Church. Another gave access to cellars under White’s House. It’s thought that a now-blocked tunnel led to the edge of the harbour. You can read more about Henry’s departure on our page about the harbour escape site.

You can see tombs and memorials of the White family in St Mary’s Church, including effigies of Thomas and his son John.