This building and yard are home to the W Clarke sculpting, church furnishing and building firm, which has produced many war memorials and church fittings. 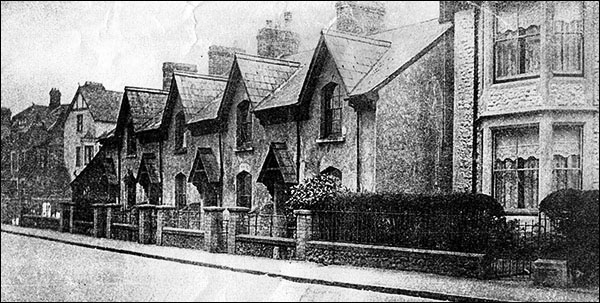 The business was founded by William Clarke (1853-1923). His father Edward, a stone and wood carver, died in 1878 after falling from scaffolding at Llandaff Cathedral.

William’s firm had premises on the corner of Cardiff Road and Palace Road until the council built Western Avenue through the site in the 1930s. Insole Cottages, shown in the photo, were also demolished for the road. Part of the land the cottages had occupied was used for the firm’s new showroom and workshop. The house on the right of the photo still stands.

In the early years William’s firm mainly repaired and maintained churches throughout the large Llandaff diocese, including the cathedral. It manufactured stone and timber church furnishings, including pulpits, reredoses, fonts and altars. Some of its headstones were of monumental proportions, such as those for Bishop Ollivant in Llandaff Cathedral graveyard and for colliery owner and poet Alaw Goch in Aberdare cemetery. 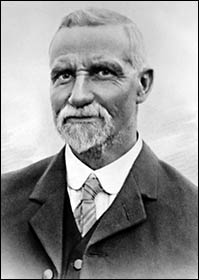 As a keen archaeologist, William (pictured right) took part in excavations of Roman remains at Caerwent, Gelligaer and Kenchester (Hereford), where he raised a mosaic floor which is now in Hereford Museum. He also helped to found the National Museum of Wales.

A few years before the First World War, William moved to Wenvoe and his son Guy (1882-1942. pictured below left) became responsible for running the business, which was involved in building the East Wing of nearby Insole Court c1907. Between 1919 and 1923 the firm was contracted to supply many war memorials – see the list of outdoor ones below.

Its 31 indoor war memorials are in churches across Cardiff and Glamorgan and as far afield as Douglas (Isle of Man), Bangor Cathedral, Trefnant (Denbighshire) and Iwerne Minster (Dorset).

After Llandaff Cathedral was bombed in 1941, Guy supervised the rescue and remedial work. His son William (1918-2000), known as Bill, served in the forces in the war and afterwards ran the firm, which was a main contractor on the cathedral’s restoration under architect George Pace. It also undertook many other church and civic repair projects.

The firm later passed to Bill’s son, William Michael Clarke (Mike), in the 1980s and became a structural engineering consultancy, maintaining strong links to its heritage.

With thanks to Michael Statham and Mike Clarke

These are some of the outdoor war memorials supplied by W Clarke: