This building was once the office and printing works of the ingenious John Jones (1786-1865). He made his own presses and type, and some of his books would fit easily into the palm of a hand!

John’s grandfather had begun a printing business in nearby Trefriw in 1776. After studying at Llanrwst Grammar School, John was a blacksmith’s apprentice in Glan Conwy. From there he went to a printing works in Liverpool, where he worked with some of the most modern presses.

Returning to the family business, he built metal presses to replace an old wooden one. He went on to make his own type (the raised letters which would carry the ink), by pouring molten metal into moulds he had cut by hand. He developed a new process to free trapped air bubbles from the metal in the moulds. One of his presses is now at the Science Museum in London, along with some of the type he made.

John’s father died in 1817. John moved the business to Llanrwst in 1825, the year after his marriage to Jane Evans. In 1836 he moved to 30 Denbigh Street (a former inn), where he sold stationery and groceries as well as the fruits of his printing press. His shop was also the first in North Wales to sell wallpaper. 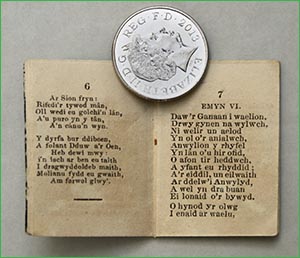 He named the business the Venedocian Press. Venedocian (Gwyndodig in Welsh) was used in John’s time as an adjective for a person or object belonging to North Wales. He published more than 200 books between 1825 and 1865. They included tiny hymn books measuring 45mm by 25mm. Given to children, these were the smallest books ever published in Welsh (see picture on left, with 10p coin for scale).

He also printed an English-Welsh dictionary, poetry and ballads, almanacs and historical texts in Welsh, including the story of highwayman Dick Turpin.

One of John’s four sons continued the business after his death. It was later renamed the Venedocian Steam Printing Works. Printing ended here with the death in 1935 of JJ Lloyd, John’s grandson.

With thanks to Stan Wicklen and Pat Rowley, of the Llanrwst & District Historical Society