This granite postcard on the prom at Colwyn Bay depicts elements of one of the trams which linked the town to Llandudno until 1956. 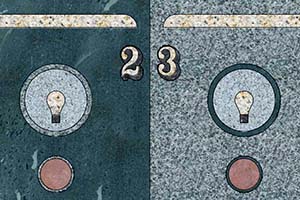 The Rhos-on-Sea to Llandudno section opened in 1907, with the Colwyn Bay extension opening in 1908. In 1915 the track was extended east to Old Colwyn but this section closed in 1930.

The tramway’s pre-1915 terminus was outside the Central Hotel (see photo below). Trams ran along Colwyn Bay’s main street, Conway Road, then through the western suburbs before descending to join Rhos Promenade near Rhos Point – the headland you can see in the distance from here. The trams climbed steeply before descending through Bodafon Fields into Llandudno.

The tramway was officially the Llandudno & Colwyn Bay Electric Railway. The grandiose title wasn’t matched by the company’s finances. Many of the trams came second-hand from other towns with narrow-gauge tramways. The rails of the L&CBER were 107cm (3ft 6ins) apart. 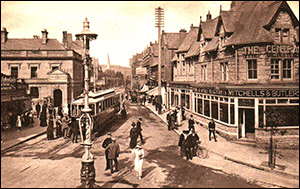 The trams were popular with holidaymakers. There were great views to be had, especially from the open-top double-deck trams. Four of the trams had rows of benches and no sides or roof, earning them the nickname “toast racks”!

The postcard depicts part of the front of tram 23, a streamlined double-decker bought in 1946 from Darwen Corporation, Lancashire. It had a pair of headlamps instead of the usual one.

The company closed the tramway in 1956 and focused on running buses in competition with the giant Crosville company.

In 2007 the Llandudno and Colwyn Bay Tramway Society finished restoring the body of a former Bournemouth tram, identical to 10 double-deckers the L&CBER bought from Bournemouth in 1936. The tram is displayed at local events. The society’s eventual aim is to run a demonstration tramway in the area.

Website of the Llandudno and Colwyn Bay Tramway Society