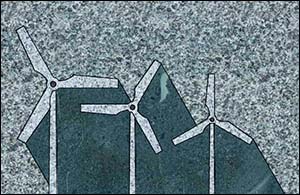 This granite postcard on the prom at Colwyn Bay depicts three of the many wind turbines which stand in the sea north of here.

The first to be constructed, in 2003-2004, was North Hoyle windfarm, comprising 30 turbines. This was the UK’s first major offshore wind power installation.

In 2015 a larger windfarm, Gwynt y Môr (“Wind of the Sea”), was completed off the North Wales coast. It has 160 wind turbines, more than 13km (8 miles) out to sea. The structures rise to 150 metres above sea level. When completed, Gwynt y Môr was the second largest offshore windfarm in the world – second only to the 175-turbine London Array in the Thames estuary. 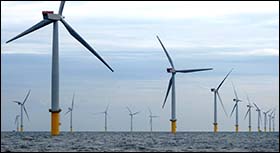 Gwynt y Môr is said to generate enough electricity to power c.400,000 homes. Its turbines are spaced across an area of c.80 square km. The windfarm was the result of a £2bn investment by RWE and its partners Stadtwerke München and Siemens.

Mostyn docks, Flintshire, was developed as the base for the windfarms’ construction and maintenance. Some of the vessels used for North Hoyle’s construction were converted fishing boats. Skippers and engineers had to learn how to install the new technology while contending with the wide tidal range off North Wales.

Some of the turbines’ foundation piles weighed 700 tonnes. The foundations are up to 28 metres below the surface.

Electricity from the turbines goes first to two offshore substations and then by undersea cable to the shore at Pensarn, near Abergele. From there it passes through an 11km (7-mile) underground cable to a substation west of St Asaph, where the power is fed into the National Grid.