The road, Wales Coast Path and Ffestiniog Railway cross Traeth Mawr on an embankment known as the Cob. Traeth Mawr means “Large Beach” and is 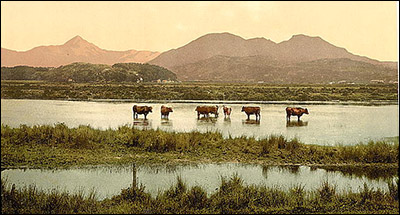 named in the ancient Mabinogi legends (see below). The 1890s photo on the right shows part of the view inland from the Cob – click here for our page about the mountains’ names.

The Cob was completed in 1811 after four years of construction. The embankment was part of a grand plan by William Alexander Maddocks, a wealthy Lincolnshire MP who had acquired various bits of land in the Traeth Mawr area. The embankment and associated facilities for control of water allowed a large area of land to be drained permanently and used for agriculture. The sea broke through during a storm in 1812. Almost 900 men from across North Wales, with more than 700 horses, offered their labour and the gap was closed.

Maddocks also had an eye on proposals to develop Porthdinllaen harbour, on the Llŷn Peninsula, as the main port for ships to Dublin. Road improvements would be needed, and Maddocks hoped the route would involve his new embankment. However, Holyhead was developed instead of Porthdinllaen, and the improved road passed through Snowdonia far to the north of Traeth Mawr.

Maddocks didn’t live long enough to see the Cob come into its own as a conduit for slate from quarries in the Vale of Ffestiniog. In 1832 an Act of Parliament authorised construction of a narrow-gauge railway from Blaenau Ffestiniog to Porthmadog, using the Cob for the final 1.5km. This stimulated the rapid growth of Porthmadog harbour. Ffestiniog Railway trains still cross the Cob, now carrying sightseers rather than slates.

The opening of the Porthmadog bypass road in 2011 relieved the Cob of through traffic and summer-holiday tailbacks.

According to The Mabinogi, Traeth Mawr is where two warring sides agreed to settle their conflict by a duel between Pryderi, from South Wales, and Gwydion from the North. Gwydion had triggered the conflict by stealing Pryderi’s pigs. With the help of his magical powers, he won the duel near Maentwrog, where Pryderi was buried.

A goldsmith's hallmark in Llanrwst

Jun 23, 2012 Even today it's commonly assumed that Llanrwst's almshouses were built by the major local ... [More]

Never a doll moment in Pen

Typing to the 'talkies'

Jun 14, 2012 The Cosy Cinema in Colwyn Bay was so small and cosy that the secretary in the architect's office above ... [More]