This building, occupied by the Gurkha Corner restaurant since 2015, dates from the 17th century and was remodelled in 1795. In 1741, hair bleacher James Jones lived here. He was also a maltster and owned several public houses, one of which was here. 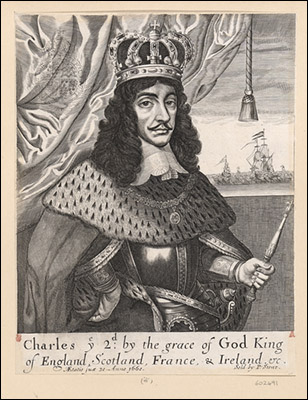 Curlers that would have been used in making wigs were found in this area during archaeological excavations in Nevill Street. This was evidence of the local wig-making industry, which developed in the 18th century. Wigs had become popular among wealthy people after the coronation of King Charles II (pictured) in 1660.

By the 18th century, white goats’ hair was often used to make wigs and curled with curlers. There were plenty of goats around Abergavenny, and the town had ‘secret’ recipe for bleaching the hair. See the Footnotes for more about wigs.

During alterations to the building in the 1960s, a 17th-century wall painting of a lion was uncovered. A photo of it is kept in Abergavenny Museum. The building was a public house on many occasions during its history, like so many buildings in Nevill Street (previously known as Rother Street). The street formed part of the early market area. The building and number 12 next door were used by the British Legion from around 1923.

The Gurkha Corner restaurant was founded by Ek Bahadur Ale, a Gurkha who was posted to various countries during his 25 years in the British army. He was based in Brecon before he retired and set up restaurants here and in Brecon. Gurkhas are Nepalese soldiers and have helped the British army since the early 19th century. More than 120,000 served in the First World War, and even more in the Second World War. Gurkhas who won the Victoria Cross are commemorated on two traditional curved knives, known as kukri, which are displayed in the restaurant.

The future King Charles II was an exile in France when Britain was governed by Parliament with Oliver Cromwell in charge. Charles copied the fashion brought in by Louis XIV, King of France, who had begun to lose his hair at an early age and wore wigs with long cascading locks. After Charles’ coronation, the fashion spread across Britain. Middle-class men who wore wigs shaved their heads to reduce problems with nits!

The wigs were sent for regular cleaning. They were boiled and the curls reset. By the end of  the 18th century, after wigs had become shorter, natural hair became popular again. Lawyers still wear wigs in court.

Textiles were a mainstay of the Welsh economy for centuries, and now you can discover many of the industry’s stories by scanning our QR codes at relevant sites. We’ve also listed the locations on this web page so that …