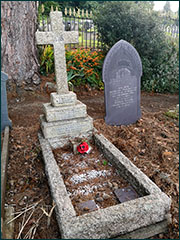 Like many young Welshmen of his time, Evan Pritchard Thomas travelled to Canada to make a new life for himself. His parents were Evan (borough surveyor for Beaumaris) and Catherine Thomas and he was educated at Beaumaris Grammar School.

He joined the Royal Welsh Fusiliers for two years, probably part-time, before emigrating to Winnipeg in May 1912. He was a carpenter by trade, but also a part-time soldier in the 79th Cameron Highlanders.

In October 1914, soon after the First World War had started, Evan volunteered for service in the Canadian Infantry. He returned to Europe in May 1915, reaching France in September 1915.

He was badly wounded by shrapnel while fighting near Ypres, Belgium, in April 1916. After hospital treatment locally and in Oxford, he returned to the Western Front in November 1917.

He had been promoted to Corporal by September 1918, when he was wounded by gunshot. He was sent back to Canada for treatment in March 1919 and discharged from the army as medically unfit for service seven months later, when he was unable to kneel on his right knee and depended on a walking stick.

Soon afterwards, he crossed the Atlantic for the fourth and final time to return to Beaumaris, where his widowed mother was living. In 1921 he married Hannah Williams. The couple lived at 6 Castle Street. He died of acute arthritis and septicaemia in hospital in Bangor in November 1924. He was 38 years old.

Evan’s younger brother Eric moved to Cardiff before the war, in which he was killed in action.