In memory of John Elias Roberts 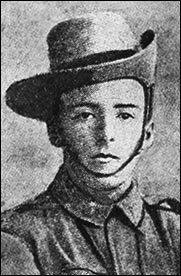 John was born to Grace Roberts and Edward John Roberts, who was a butcher at 33 High Street, Bethesda. In his youth, John worked for WJ Parry at Coetmor Yard, supplier of building materials and explosives. He was a member of Seindorf Arian Bethesda (the town’s silver band) and played for the local “Wednesdays” football club.

He ran his own butchery business in Gerlan before emigrating, c.1910, to Australia, where he worked as a butcher in Melbourne. He enlisted in the army on 18 August 1914, soon after the First World War broke out. 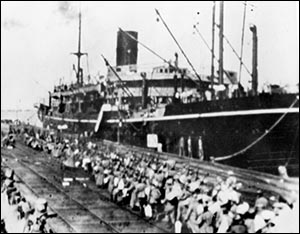 After training, John was in the first contingent of the Australian Infantry to travel to the theatre of war. He left Melbourne on 19 October 1914 on board HMAT A20 Hororata, pictured right shortly before departure.

He served for about four months in Egypt before being taking part in the Allies’ disastrous attempt to invade Turkey through the Gallipoli Peninsula. He was killed in action on 25 April 1915, aged 25. He is buried at Lone Pine Cemetery in Turkey.

His widowed mother was officially informed of his death more than a year after his death.